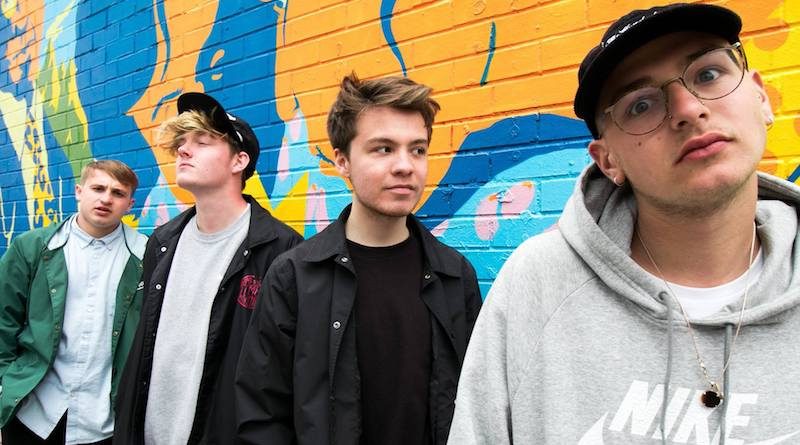 Birmingham is a hotbed of talent, and one of the many bands that have begun to breakthrough on a more national scale are indie upstarts Riscas. Despite their young age, the band are a pedigree in sound, blending the dance-oriented urgency of Two Door Cinema Club with the indie struts of The Night Café.

Not long after forming, the four-piece found bedrock support from the BBC, which evolved into their first demo, Panic Like Tom, receiving airplay on Radio One. Since then, the Spotify listens have racked up, helped by the release of their first single proper, Talk Your Mind. The group have recently chalked up another accolade, headlining a sold-out Sunflower Lounge. Sam Lambeth spoke to the band to find out more.

Tell us a little about how the band formed. I understand this happened at college? Do you feel being in that musical environment, where you can play and rehearse on a regular basis, has helped you get so tight so quickly?

That’s correct yeah, we formed when we met at college, felt that instant friendship and musical connection between us all and developed from there really, it helped us a lot being able to write and rehearse everyday, which obviously developed us as a band and be able for us to get so tight, it’s all about being on the same level.

You hadn’t been going long when you first started to taste some recognition. Can you tell us about where it all started, in terms of label interest?

I think it’s really all down to the amount of support we had from the BBC teams all over. Without them we wouldn’t have any of this, from the first play on BBC Hereford and Worcester to the airplay on BBC Radio One. They supported us the whole way and we can’t thank them enough for their support. Being announced as Radio One’s ‘Introducing Artist of the Week’ and then charting fourth on Spotify’s top 50 tracks of the UK was incredible. That still hasn’t sunk in really.

From that initial interest, Panic Like Tom – not even a single, but a demo – achieved rotation on BBC Radio 1. How rewarding was that for you guys, that a (not in a derogatory way) indie demo become played on a radio station no longer affiliated with ‘rock’ music on a widescreen basis?

For us that was the start and truly the most rewarding thing, knowing you can just release a demo back in Christmas to a few of your local fans and friends, and within a few months it gets picked up by the biggest radio in the UK and beyond, giving us a national fanbase and even fans across the globe, which is insane. It’s one of those things that will never sink in! We think it’s great that BBC Radio 1 have got the BBC Introducing scheme now, it gives bands and artist like us the opportunity and platform they deserve.

You recently ticked off another box by headlining The Sunflower Lounge, selling it out in the process. I imagine while some of the audience would have been friends and people you’ve met while in the band, it must have been thrilling to see strangers connect with your music? Not just live, but through Twitter, Spotify and such?

Yeah that was great for us! The best show we’ve played so far and it was topped off by a stage invasion, but we do all feel very, very humbled and the amount of support we’ve had, we always say that we write music because it’s what we love. It’s insane receiving messages from people telling us that Panic Like Tom has made them go from sad to smiling! We also had one from a guy who starting to learn guitar after hearing ‘Talk Your Mind’. It’s mind-boggling.

Has achieving such success so quickly put any pressure on your shoulders, or do you feel you are thriving on it?

We are more than happy about how far we’ve come and really just want to continue being the best we can be, releasing new songs that people love, but of course there is pressure, people are looking and waiting for the next track but we’re always going to be thriving to be the best we can be. Luckily we have a fantastic team around us that help, for example the level of support given by our producer Ryan Pinson from RML Studios, he’s fantastic.

You’ve got a slew of festival dates lined up, following on from your performance at Valefest. How do you cope with the scope and scale of a festival performance? Do you approach it differently than you would a normal indoor gig?

Absolutely, they’re two very different things, when it comes to indoor gigs you know what the sound is going to be like and have sort of an idea about how the crowd will react, whereas at a festival it’s very much anything could happen and that’s the mind set you go in with. I guess that’s what makes all gigs so exciting and fun anyway, it’s all about the buzz you get before going on stage, to do what we love doing, playing music.

What is next for the band?

We can’t say too much at this stage but we have some very exciting announcements to make very soon. We’re working with some great people at the moment, it’s really buzzing for us at the moment. There are a few shows & festies we’ve announced already (listed on our Facebook page). Just keep your eyes peeled I guess haha.