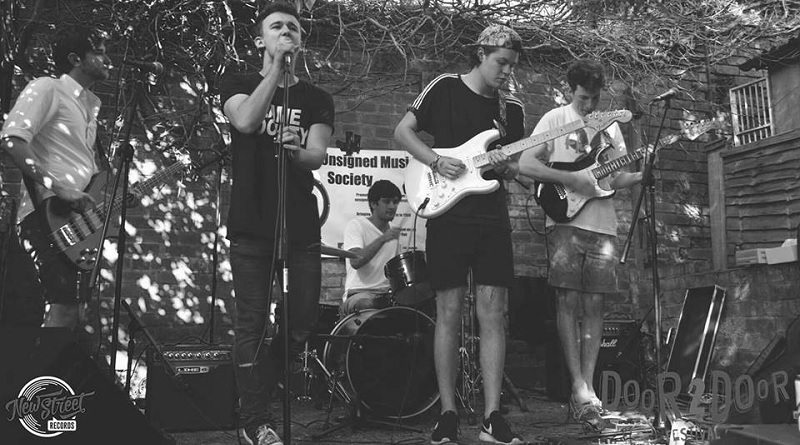 Coffee Breath are new on the Birmingham scene with their debut single, Runaway/Marshmallow. Citing Pity Sex, American Football and Nai Harvest as influences, they’ve bagged support slots with DAME and Slowcoaches, to name a few. We caught up with them in Joe’s bar on the University of Birmingham campus to see what they’re about.

“We all met through different ways” says guitarist Matt Reynolds “Me and Sam met at a rave. But then found each other through Facebook afterwards. Ryan put up a post on one of these ‘selling musician’ pages and then we just bonded though that.”

“We were just lucky to meet a load of people that kind of just gelled quite well.” Chimes in drummer Cem Ozer.

In November of 2016, Coffee Breath played their first city centre slot to a sold out Sunflower Lounge supporting DAME. “It was great,” Matt tells me, “we got some really good reactions actually which we kind of weren’t expecting. We are quite different from the other bands on so I was surprised to hear people we don’t know coming up and complimenting us”. Front-man Sam Tidmarsh has been surprisingly quiet until now. “It was cool to get people getting the lyrics now, people recognizing the songs and stuff.”

The guys agree that the DAME show was one of their best so far, although Cem assures me that every gig has been enjoyable. Other favorites they name are a show at the Duck & Scholar in Edgbaston, Door2Door festival in Selly Oak, and a surprise house show, “We had a house show for Cem’s birthday which went off,“ says Matt.

Coffee Breath’s live shows have attracted serious interest, as they tell me they are off for another interview after this one, “it’s the only time we’ve ever been, Oh, we’ve got another interview” Cem assures me,  “It’s a one off and we just appear like, this is just our standard.”

Their double A-side, Runaway/Marshmallows has had multiple plays on BBC WM Introducing and they’ve been play-listed by Spotify. In both tracks the band layer lush guitars with fragile vocals and Sam wears his heart (and emo influences) firmly on his sleeve. In both ‘Runaway’ and ‘Marshmallows’ the songwriting is smart and full of alt-rock hooks, at times reminiscent of local legends Johnny Foreigner.

“I’ve been into Johnny Foreigner for years, so coming to Birmingham was cool because I can see them every so often now,” says Cem. When asked about the recent show they played at the Flapper, he says it was “probably the best time I’ve seen them. I thought they were wicked. I’ve seen them before in London a couple of times. I saw yr poetry supporting Ringo Deathstarr which was cool. I just see them every so often now. I really rate them.”

When asked about other influences, Matt answers: “Obviously American Football, big into them. We saw them over the summer, it was sick.” Sam volunteers TTNG (This Town Needs Guns), and Matt agrees, “they’re like a progression from American football, a bit more twiddly.”

“They’re taking it to extremes,” says Cem. “Oh, do you know Jank? American band, they had this one album that was absolutely awesome. Kind of slightly technical but kind of tongue in cheek, just a super fun album and now they’ve kind of disappeared because there’s been some uncomfortable rumours…”

Moving swiftly on, we talk about covers, Pity Sex’s ‘Dogwalk’ has been a mainstay of the Coffee Breath set. “We’re faithful to that cover,” says Matt, “Shannon [Farmer, DAME singer] came well close to doing that with us at the Sunflower Lounge, Pity Sex have a female vocalist as well, it sounded sick in our practice as well but I think she was a bit nervous for her set and wanted to concentrate on that.”

“So I sang the female vocal instead.” Says Sam.

2017 looks like an exciting year for Coffee Breath, with plans to get back to the studio.

“We’ve got a few songs, maybe four songs down at the moment that aren’t recorded,” says Matt.

“Hopefully we’ll get a good 4, maybe 5-track EP, but this is what we’re trying to work out,” Cem says. “Hopefully play more in town, and play some gigs out of town in different places. Hopefully get round some different cities… Maybe try and put music out on a label of some kind…”

“We’ve got a couple of offers floating about,” Sam hints.

“Have you ever been to Yorks in town? I love Yorks,” says Matt.

“Don’t they do the Jazz stuff there?“ Cem asks. “Yeah they have the Jazz nights and stuff,” replies Matt.

“I can probably find it,” says Sam, consulting his phone. “It’s called Faculty Coffee. That’s quite good. It’s down Piccadilly Arcade, it’s actually like this nice little cute place. You can get a good coffee in Birmingham.”

Keep up to date with Coffee Breath on Facebook.