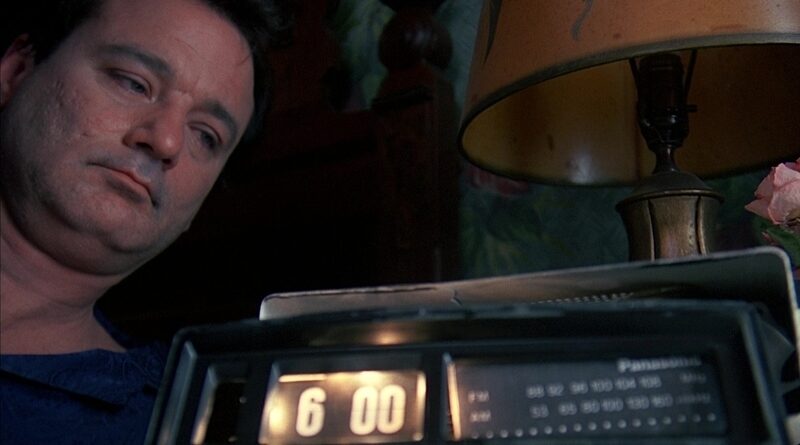 In our new series, Lockdown Looking Glass, we’ll be looking back on films that hit a little differently in lockdown. This week: Harold Ramis’ iconic Groundhog Day.

Is it Tuesday? Or Wednesday? Surely it is sometime between March and August, right? Are the terms yesterday, today, and tomorrow now the only reliable measures of time? If these questions have plagued you, then have we got the film for you!

The brilliantly sardonic Bill Murray plays Phil Connors, an arrogant, self-obsessed weatherman who finds himself condemned to relive February 2nd over and over again in Punxsutawney, Pennsylvania. The film is a particular breed of 90s wholesome comedy, from the soft lighting to the addition of Andie MacDowell as well as the overly literal song choices (I mean, come on, the film is bookended by a song called ‘Weatherman’!).

Naturally, no wholesome 90s film would be complete without a wholesomely peculiar American tradition for the story to pivot around, hence the Groundhog Day Ceremony. Superstition states that the actions of the Groundhog on February 2nd will determine when winter will end, and spring will begin. It is particularly fitting that in America, the land of Trumpian “fake news” and CNN, they choose to rely on the intuitions of a Groundhog, rather than their actual broadcasters.

Despite its simplistic premise, the film quickly establishes itself as a witty, Kafka-esque comedy, exploring a spectrum of reactions to crisis, very much reflecting our own crisis behaviour. During one of his early iterations of February 2nd, Phil drowns his sorrows in a small-town bar, along with two bleary-eyed barflies. Grieving his loss of normality, he asks: “What would you do if you were stuck in one place and everything was exactly the same and nothing that you did mattered?” 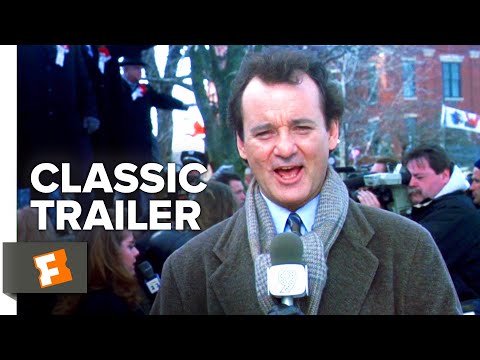 As the two listen on sympathetically, this question feels uncanny to us quarantined watchers stuck at home. In lockdown, so many of our choices feel powerless, and ineffective, as if no consequences could every truly exist outside of our quarantined realm. Therefore, many have chosen to experiment with the seemingly endless time we now have. Much of Murray’s behaviour within the film is symptomatic of these feelings, choosing to overindulge in food, seducing women, and even attempting crimes, all for the thrills of the no-consequence existence.

However, there is a dark side to this misuse of excess time, as Phil is forced to revisit the recent past at the hands of his clock radio at 6am every day. The film begins to lose its linear structure, as time loses its reliability to trace our narrative, as we follow Phil through a trajectory of grief and acceptance. We see the film turn surprisingly dark in Phil’s attempts to break the monotony of his repeated existence, as he jumps off a building, and electrocutes himself in a bathtub.

After basking in the nihilism of it all, Phil attempts to use his plight as a learning experience. He learns piano to impress the enchanting TV producer Rita (Andie MacDowell), learning more about her on each date they repeatedly attend. In a spree of life-saving galore, he saves several townsfolk, performing Heimlich manoeuvres and catching falling children left, right and centre. The film makes the most of this sentimental rehabilitation, with the film culminating in a sugar-sweet ending where Phil reaps the rewards of his random acts of kindness.

Phil Connors’ trajectory from grief, to nihilistic spontaneity to opportunistic self-improvement is one which mirrors our own spectrum of reactions to quarantine. As we grapple with concepts of time blindness and temptations towards self-destructive behaviours, Groundhog Day offers us a solution to our own time-weary woes.

The solution of Connors’ state of suffering is innovation, confrontation, and kindness. We see innovation in his precise use of time, and his ability to confront the ways he has mistreated others in the recent past, to inform his actions. We see his ability to empathise, and invest in the issues of those around him, even in small gestures, such as buying insurance or giving advice about a bad back.

When considering our own time in lockdown, it’s worth noting these gestures, and the power they provide in escaping the nihilism of endless days. So, if it’s learning a new skill, helping a neighbour in need, or just trying to be nicer to your quarantine cohorts, it is worth heeding this advice. Or else, our own days in lockdown may turn into our very own February 2nd.

If you’re looking for some comedic, insightful relief, Groundhog Day is streaming worldwide on Netflix.