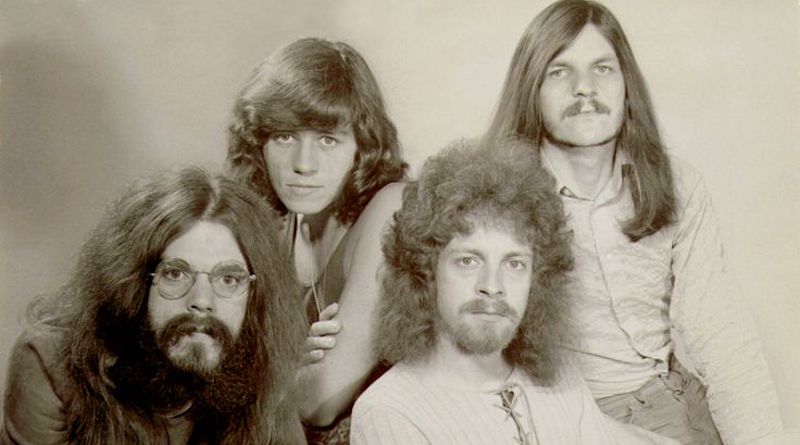 A homegrown band shaped by Bowie and styled on The Who, that became the forerunners of Glam Rock.

In 1963 the UK was furtive in musical styles, from Liverpool’s Mersey Beat, led by The Beatles and Jerry and The Pacemakers in the north, to the R&B of the south, spearheaded by the likes of The Rolling Stones, Eric Clapton and Jimmy Page. Orbiting geographically in the middle of these were a handful of lesser known but still highly active Birmingham bands, including Mike Sheridan and The Nightriders, Danny King and the Mayfair Set and The Vikings. It was out of this local scene that The Move found their origins, when Yardley born Nightriders vocalist, Roy Wood, teamed up with The Mayfair Set’s Ace Kefford and Trevor Burton, with a vision to assemble the cream of the local musical crop and modelled on The Who.

Kefford and Burton had been to see London based, Davy Jones and the Lower Third, at Birmingham’s fashionable Cedar Club on Constitution Hill. They got chatting to the vocalist Davy Jones after the gig and he suggested that they form their own band. They took the advice of the singer, (the man who was soon to find stratospheric fame and fortune as David Bowie) and in 1965, in that same venue, the original Move line-up took to the stage. The Vikings vocalist Carl Wayne was chosen as front-man along with Bev Bevan on drums, a spot that was turned down by a certain Redditch born drummer by the name of John Bonham, who went on to become the celebrated sticks man for Led Zeppelin.

Under the leadership of Wayne, the group started plugging away mixing covers of west coast American groups such as The Byrds and Moby Grape, with various Motown and rock ‘n roll classics. The gigs started to come in thick and fast and they soon got the attention of The Moody Blues former manager, Tony Secunda, who secured them a weekly residency at London’s famous, Marquee Club. They quickly garnered a reputation for wild stage shows, including flash bombs, smoke and a penchant for smashing up old TV’s (eat your heart out Keith Moon!). This eventually got them banned from the Marquee, but attracted the attention of the labels, resulting in them signing to Deram, a subsidiary of Decca Records.

Encouraged by Secunda, Roy Wood took to song-writing and penned their first record release, ‘Night Of Fear’ in 1966, which borrowed its riff from Tchaikovsky’s classical ‘1812 Overture’. The song peaked at number 2 in the charts and was labelled as psychedelic. Capitalising on his new found talent, Wood quickly followed this up with ‘I Can Hear The Grass Grow’ and the famous, ‘Flowers In The Rain’ in 1967, which was the first song ever to be broadcast on BBC Radio 1.

The Move were “moving” in the right direction. They went on tour with Pink Floyd, Jimi Hendrix and Amen Corner and released their debut album, The Move, in March 1968 which reached #15 in the charts. But an ill-conceived publicity stunt, involving Prime Minister Harold Wilson, backfired and the band and their management were sued, with all the song-writing royalties for ‘Flowers in The Rain’ being confiscated and donated to charities of Wilson’s choice. This was the hammer blow that caused the departure of Secunda and the introduction of Don Arden as their new manager, one of the toughest in the business. Shortly after their next release, ‘Fire Brigade,’ which saw Wood take up lead vocals for the first time, guitarist Ace Kefford quit the band due to ‘personal issues’ (read acid burnout) and they were reduced to a four-piece

The next single to be released ‘Wild Tiger Woman’ failed to chart due to lack of airplay, but at the end of 1968 they released ‘Blackberry Way’, which reached #1 in the charts and remains one of their defining tracks as well as one of the most notable of the era.

At the end of 1969, Trevor Burton left the band due to musical differences precipitated by an on-stage argument with Bev Bevan on tour in Sweden. His departure meant they had to cancel their scheduled US tour. His replacement was Rick Price of the Cimarrons, another veteran of the local music scene. With Price on board they embarked on their one and only US tour supporting The Stooges. Whilst they were away, Arden sold their management contract to Peter Walsh, who was managing another band, Marmalade, and on their return to the UK, The Move found themselves playing lucrative cabaret venues. This caused friction between Wood and Wayne, the only original band members left. Wayne eventually quit the band in January 1970, a month before the release of their second album, Shazam. He was replaced by Jeff Lynne, who himself had replaced Wood when he left The Nightriders.

The song writing force of Wood and Lynne, propelled the band through their most prolific recording period as they stopped touring and headed into the studio. They wanted to incorporate classical sounds as pioneered on The Beatles, ‘I Am The Walrus’ and started work on a new experimental album that veered away from the recognisable ‘Move sound’.

A new three-album deal was signed with Harvest records before the release of their third album, Looking On, but the contract didn’t include bassist Rick Price. The trio of Wood, Lynne and Bevan released the final Move single, ‘California Man’ in 1972, which reached #7. The new experimental album, The Electric Light Orchestra was released to critical acclaim. ELO were officially born and The Move were no more.

Wood left ELO the following year and formed Wizzard, teaming up with ex-Move bassist Rick Price and entering Christmas folklore with the 1973 single ‘I Wish It Could Be Christmas Everyday’. He became a lead proponent of the Glam Rock era and continued to have chart success right up to the end of the 1970s. Jeff Lynne and ELO took the late 70s by storm with multi-million selling albums and spectacular live shows. The original band disbanded in 1985, but Lynne still tours today as Jeff Lynne’s ELO.

Roy Wood and Trevor Burton supplied the backing vocals for Jimi Hendrix’s “You Got Me Floatin'” on the Axis Bold As Love album released in 1967.

Flowers in The Rain | Not only a track that showcases what The Move were all about in the 60s, with its psychedelic leanings and the genesis of Roy Wood’s song writing expertise, but one that goes down in the annals of popular music as the very first song that DJ Tony Blackburn played on BBC Radio 1. The DJ later confirmed that it was mainly due to the thunderstorm sound effect at the start of the track that it was selected to launch the radio channel.

“And, good morning everyone. Welcome to the exciting new sound of Radio 1.”

Fire Brigade | With its Duane Eddy inspired guitar line, Fire Brigade released in 1968 was the band’s fourth single. It was also the first single to feature Wood on lead vocals, issuing in a sea-change for the band’s dynamic. It was the last song with all five original members as shortly after it’s release guitarist Ace Kefford left and they were reduced to a four-piece.

Blackberry Way | The sixth single to be released by the band and again during the fruitful year of 1968, this was their most successful single, charting at #1. Inspired by The Beatles “Penny Lane”, it offered an antithesis to the sunny side up psychedelia of the flower power years, with its bleak lyrics sign-posting the way to the end of the hippie dream.

California Man | This was the final single released by The Move in 1972, a rock and roll stomp with both Roy Wood and Jeff Lynne on lead vocals. It reached #7 in the charts. A month later the experimental side-project, The ELO (Electric Light Orchestra) formed to further explore the sonic palette of The Beatles’ “I Am The Walrus”, leading to the demise of The Move, as ELO transformed from experiment to fully-fledged band.

Spurred on by Davy Jones’ suggestion that Ace Kefford and Trevor Burton should form their own band, the debut gig of The Move took place at the Belfrey Hotel on January 23rd 1966. The band played mostly covers of west coast American groups such as The Byrds and Moby Grape, with various Motown and rock ‘n roll classics.

Supporting The Jimi Hendrix Experience, the band went on a UK tour which was kick-started at this 6000 capacity venue. The Pink Floyd, The Nice and Amen Corner were also on the tour, which allocated headliner Jimi Hendrix a 40 minute slot on stage, The Move 30 mins and Pink Floyd a rather short 17 mins. The Nice and Amen Corner probably only managed a couple of songs between them!

Under the management of Tony Secunda, The Move managed to secure a residency at London’s legendary Marquee club. On May 5th, the band were recorded live and a seven-inch EP was released in June entitled “Something Else From The Move”. They were later to be banned from the club due to their wild on-stage antics.

Read: A beginner’s guide to: The Streets