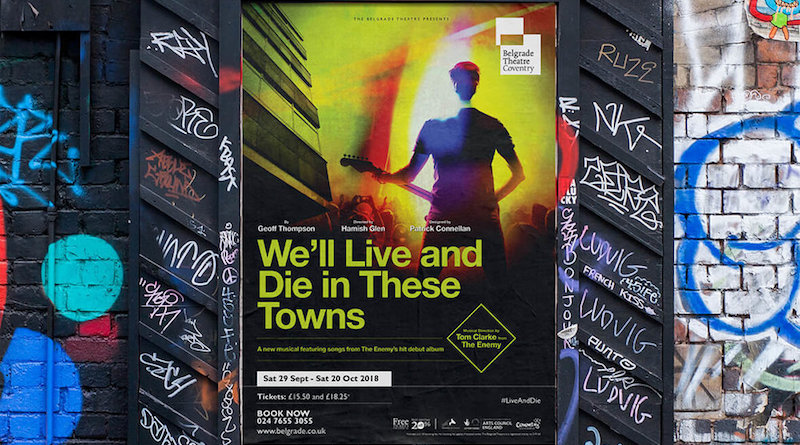 Tom Clarke will make his first foray into theatre this year with a brand new musical drama at the Belgrade Theatre.

We’ll Live and Die in These Towns takes The Enemy’s number one debut album of the same name as its soundtrack, led by the band’s former frontman as Musical Director.

The play centres around Argy, a musician preparing for a major homecoming gig that could make or break his career. Finding himself overcome by a sudden crisis of confidence, Argy cannot take to the stage. His manager sends him off into the city, where revisiting his past helps him to make important decisions about his future. Argy’s worked his whole life to earn his big break, but now it’s here, will he be able to face down his fears and seize the moment?

Tom Clarke said: “This is something so different from anything I’ve done before. It’s exciting to be working with new musicians, and to be dissecting songs that are almost like muscle memory for me now, and putting them back together in a very different way.”

Playwright Geoff Thompson said: “When I first heard that album, it felt so raw and truthful and full of anger. It captured everything I was feeling, and I just had an intuition that I could put it into a story.

“This is a universal story with universal themes, but first and foremost it is a Cov story. The poetry and the rhythm of it is Coventry, and that’s why I wanted to do it at the Belgrade. It felt like it belonged here.”

The play is at the Belgrade Theatre now, and will run until October 20th.