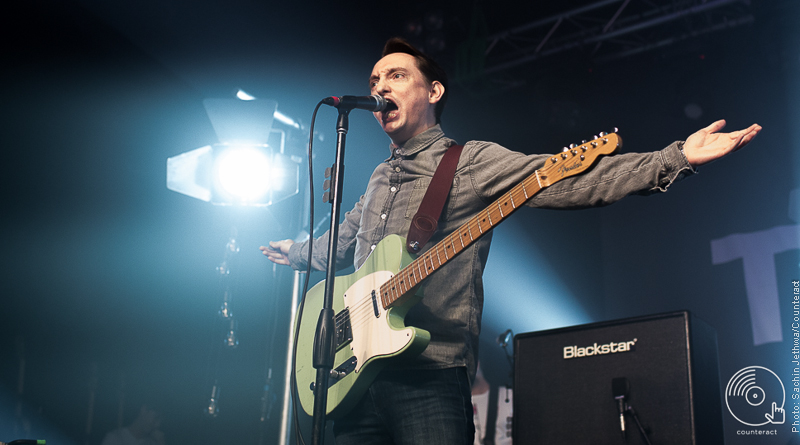 The Commonjets opened the night as crowds began to line The Empire, Coventry. Aggressive yet melodic, their energy slowly infected the audience as they dipped in and out of genres, varied in pace and tone and offered everything from indie-rock to Ska from The Specials. Perfectly polished, the band demonstrated their musical talents from the outset with explosive instrumentals and sharp vocals. Hailing from Coventry, the four-piece rattled their hometown with a punchy set, laced with tantalising tunes to rouse onlookers unfamiliar with the band and no doubt hit them with another gem such as recently released single ‘Archive’ in the not so distant future. Already totting up some impressive live credits, the band are making waves on the scene, working closely with some big names and chipping away at their musical landscape.

Nuneaton’s April showered the thawing crowd with their new era Britpop vibes. Stage presence aplenty the five-piece burst into BBC Introducing fave ‘Ten Miles High’. Evident that they’re bound to soar, April smashed out a performance ahead of their years with rapturing instrumentals, hooky riffs and a past decade aura which hooked the growing crowds. Frontman George possesses qualities suggesting the growth into an iconic frontman. The bands image, sound and performance unique, yet influence filled, exciting to witness a small part of musical history potentially on its long-awaited return.

Hip-Hop meets acoustic, pulsating angst meets intricacy, Prose have an unrivalled ability to create cocktails of musical genre, with a hook-filled simplicity, uncompromised on their lyrical fervour. Fronted by Mike Murray the band bring a refreshing vivacity to The Empire with their distinctive sound and self-created award winning sub-genre. Rich in harmony and anthemic in style Prose tease the crowds with tracks from their recently released debut album ‘Home of the Brave’. Intervals in their set filled with ‘This Song’ lyrics bawled from fans highly anticipating The Enemy’s entrance, Prose remained unphased by the audiences urgency, responding with humour and continuing to wash the venue with artistic sound. Dynamic and fresh, this multi-faceted force are set to shake up the scene, making a statement through poetry that’s as comprehendable as prose, ballsy as hip-hop and delectable as indie-pop.

Football chants welcomed The Enemy to the stage. Frontman Tom Clarke, bassist Andy Hopkins and drummer Liam Watts were met with a tangible energy. Enticing the crowd with a reminder of what their farewell tour is all about; Tom had the adorning crowd in the palm of his hand from the get go. Mirroring the pulse of the thoroughly warmed crowd ‘Had Enough’ let rip. Followed by ‘Aggro’, apt for the angst and heated emotion wavering through the Coventry crowd.

The Enemy have made no secret of their intentions, the sun going down after ten years and four studio albums as the indie-rock three piece for a variety of reasons. A “lack of exposure” being mentioned most regularly. Since their explosion onto the scene with We’ll Live and Die in These Towns in 2007, the music industry has altered somewhat. Mainstream TV and Radio have rid themselves of a “place” for the majority of acts of similar genres – negatively affecting bands and musicians and leaving music lovers with an unfed appetite. Laced with family, friends, loved ones and devoted fans the night saw an out-pouring of passion for the works of The Enemy and heartfelt disappointment at the loss the music scene is facing.

Remaining true to their second album title Music For the People, The Enemy gifted fans with a real showcase of a set list, playing every track from their first album as described by Tom as “the one which means the most to you all.” Acclaimed in 2007 by NME as ‘the act most likely to break your windows’ this show was no different. Each song played as if their lives depended on it and celebrated by fans as truly a vital part of theirs. Sentimental tracks such as ‘Happy Birthday Jane’ turned the crowds to putty in the trios hands, palpable emotion wrapped the audience before belters such as ’40 Days and 40 Nights’ served as a sudden reminder why fans allowed these Coventry boys to soundtrack their existence.

Introducing tracks for their final studio album It’s Automatic, Tom aired his disappointment for the lack of exposure however lost all concern for this following absorbance of the crowds hunger for their art.

Flares filled the air, clouding the mosh pits appearing like sink holes dotted throughout the venue – many a crowd surfer battled over the erratic gathering. The Enemy’s anthology of true-to-life tales, emotion that’s cool to admit and the story of their followers youth shook Coventry.

The Empire housed a breathtaking atmosphere, rivalling that of shows played by all time greats. Lyrics of ‘This Song’ constantly bounced throughout the night, exploding during the bands performance of the track; an unforgettable moment for all present.

This gig sits towards the final stretch of their farewell tour and will no doubt be unforgotten by everyone in attendance. As emotional for the audience as for the band, many tears were shed but nothing was left behind in the celebration of their accomplishments. Lapping up every last beat and holding on to every last chord the audience departed in reverie. A piece shall always be missing from the jigsaw of the music scene, however will be replaced by fans and followers handing down The Enemy‘s creations. It may be goodbye from the band, but it’s the start of their legacy which will be sewn through generations.