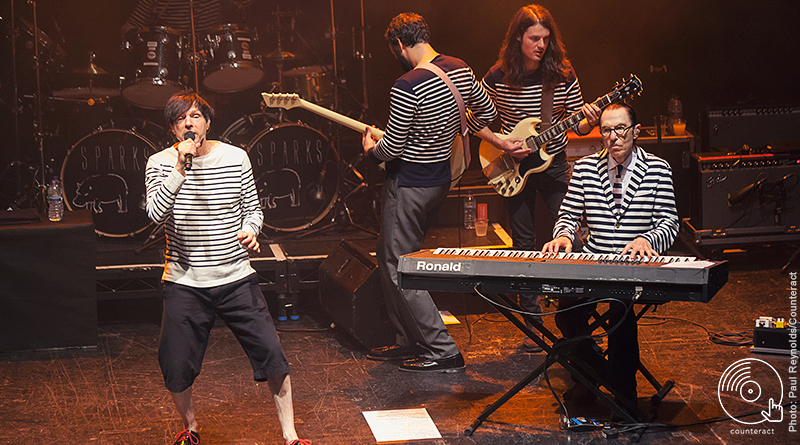 If the steely gazed Ron Mael gets up from behind his keyboard to proffer a smile and a speech, along with brother Russell to a rapturous audience, then it’s clear we’re witnessing something pretty special. A million sticks of dynamite could not have raised the roof any higher than the wildly enthusiastic Institute crowd. Sparks flew and two thousand devotees of their gloriously unique synth pop art rock hung on screaming. 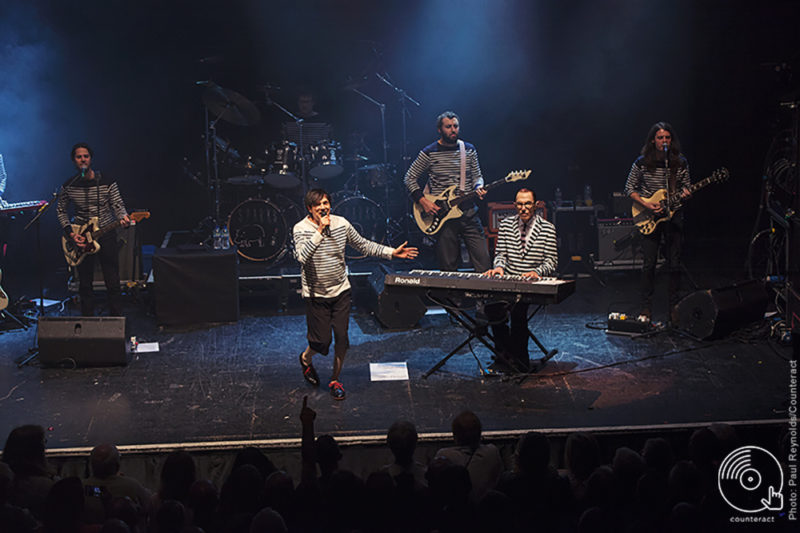 Bounding on stage dressed in what could easily be Russian sailor uniforms and straight into ‘What the Hell is it This Time?’,  from the new album Hippopotamus, the song is a powerful reminder that Sparks have lost none of their musical and lyrical resonance. An uplifting pile-driving refrain; reminiscent of a fist pumping repeatedly on a table, powers on as the brothers Mael, backed by a band tighter than Ron’s tie, waste no time in exposing us to their singular world view – “It’s you again, it’s you again, you get on my nerves.” We’re only one song in and already there’s a deliciously surprised glint forming in Russell’s eyes and a half smile to match as he realises this is going to be an almighty gig.

With a musical legacy spanning five decades, new album Hippopotamus is their twenty second release, Sparks effortlessly flit from classic to classic. A couple of tracks from 1974’s Propaganda album, ‘Propaganda’ and ‘At Home, At Work, At Play’, are lovingly introduced by Russell with thanks to the Birmingham heritage of producer Muff Winwood who also produced Kimono My House. 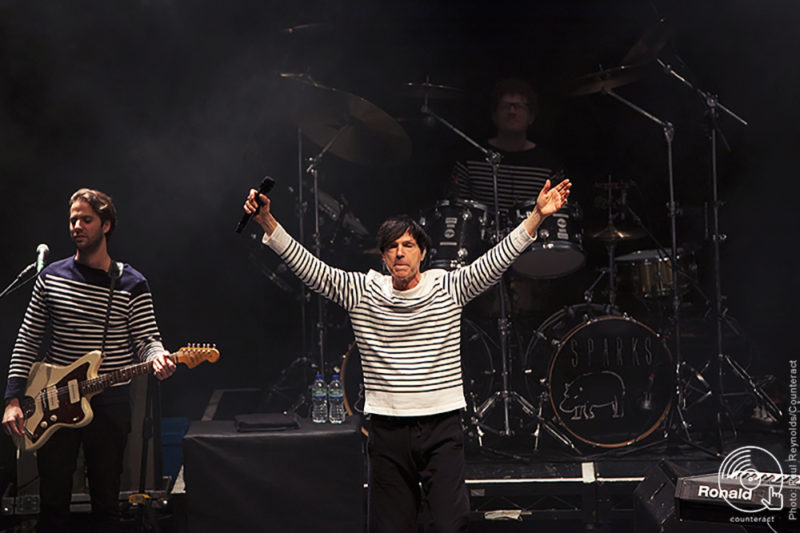 The title track from the new album is almost jarring in its eccentricity both lyrically and in construction but that’s what makes Sparks so essential. Seamlessly slipping through disco, pop, cabaret and rock like it’s the most natural musical progression there is, and of course for Sparks it’s as natural as the hippo and painting by Hieronymus Bosch found in their pool.

Highlights mid-set include the uproarious paean to slacker-dom ‘Dick Around’, from Hello Young Lovers, as Russell shows off his impossible vocal dexterity with his falsetto tones manfully whipping through the wickedly verbose song and the mournful ‘Never Turn Your Back on Mother Earth’, another song from Propaganda. By this time audience and band are locked in a tight embrace of mutual awe. The cute half-smile twitching on Russell’s face has morphed into a full on grin. 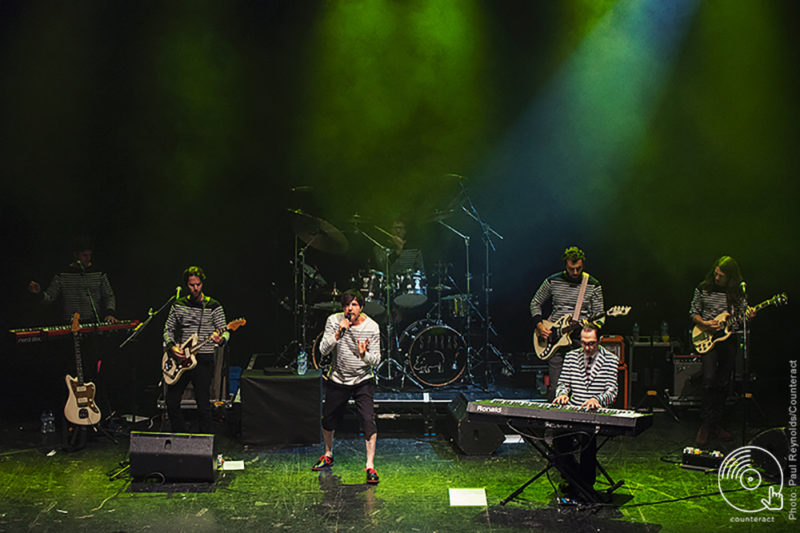 Sparks may have an astonishing back catalogue but there will always be two songs that stand out and just as it feels like this show can’t get any better, boom! they hit us with them, ‘The Number One Song in Heaven’ and ‘This Town Ain’t Big Enough for Both of Us’. This is the nuclear option for Sparks and a joyous crowd dutifully explodes. Biggest surprise is Ron emerging front of stage and breaking out in a bout of epileptic dancing as sharp as his sinister smile.

The boys encore with ‘Johnny Delusional’, a product of their collaboration with Franz Ferdinand, a rampaging synthesis of indie pop angst followed by our favourite Sparks track ‘Amateur Hour’, from Kimono My House, containing one of the seventies greatest guitar riffs, delightful keyboard frills and off kilter lyrics, perfect Sparks. It’s clear neither band nor audience ever want this to end, but after several minutes of mutual appreciation one of the best performances in the city this year is over. “Amateur Hour goes on and on” but not long enough.

Support came from Mister Goodnite who mixed cool samples with Vegas lounge style vocals, which we’re certain sounds great on record, but with only Tyler Parkford on stage and an audience hyped up for Sparks it all got a little lost. Tyler is the keyboard player in Sparks live backing band. 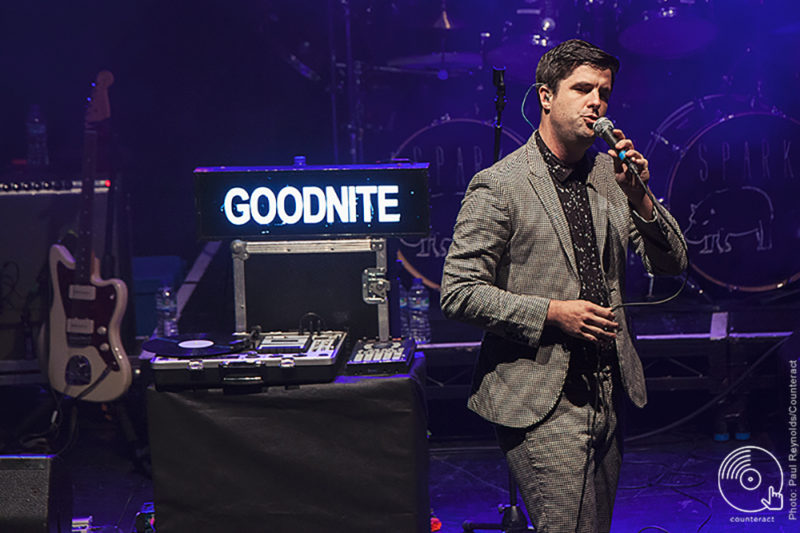