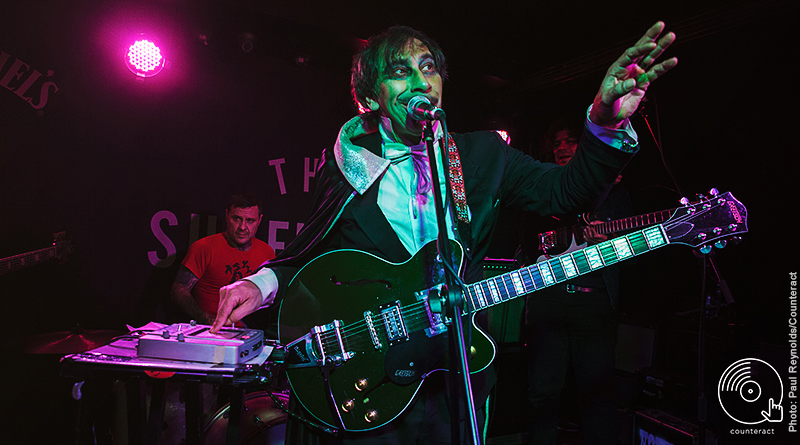 Snow settles outside, but the newly refurbished basement of the Sunflower Lounge is crowded and hot. A stripped back Rhino and “some” Ranters (who more often perform under their full line up, Rhino and the Ranters) open the evening. Front-man Ryan Webb’s self-described “cow punk” receives a warm reception. Webb himself seems unsure, making self-deprecating jokes. However, the roomful of nodding heads is about as appreciative as you could expect from the assembled goth rockers. The Ranter’s well-rehearsed bluegrass vibes are punctuated with discussion of the weather – it’s some very British Americana indeed. Towards the end of their set, the mandolin player takes centre stage to showcase some impressive fingerwork. 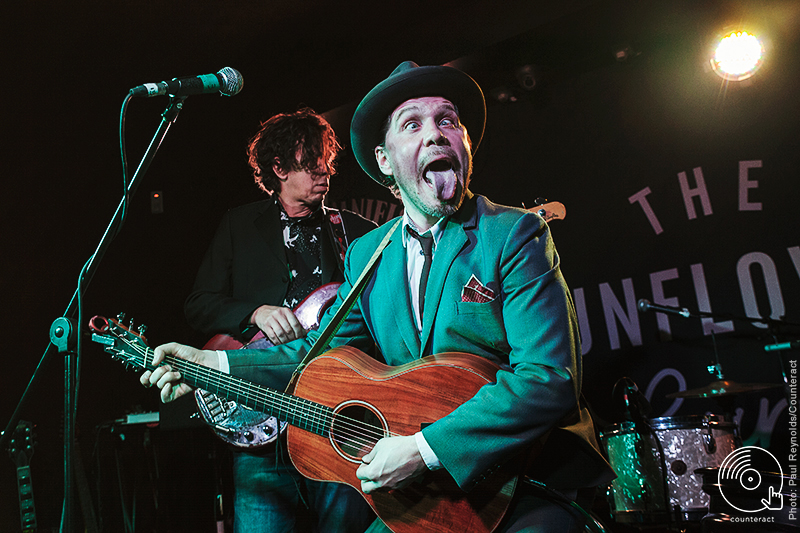 Rhino and the Ranters

Black Mekon are next. One of the brothers, clad in their recognisable superhero mask, blasts out a harmonica solo backed by pounding drums. The other brother emerges from the crowd, clapping, dancing, and generally making sure the crowd are as excited to be there as the Mekons are. Tracks from their newly released LP, One In The Hate (out now on PNKSLM Recordings) go down a treat, as do older fan favourites such as ‘Backseat Babe’ and the live stable ‘You Are My C*nt’. Black Mekon’s fuzzed out, freaky rock ‘n’ roll is the perfect warm up. 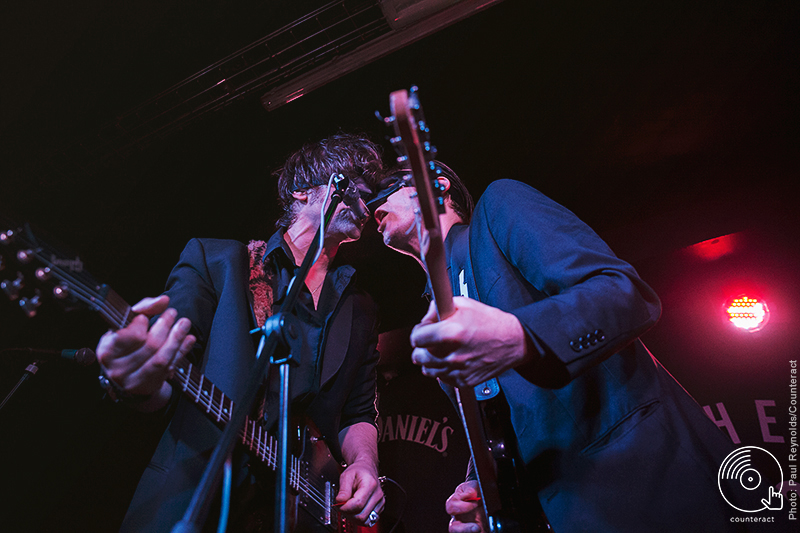 After a short interval, he appears. Kid Congo Powers is draped in a plastic vampire cape, eyes heavily outlined with greasepaint and skin tinged green. “Happy Halloween, Birmingham! We have come from the house of the spider baby”. He briefly introduces his band (“The sailor! The tall one! And the drummer!”) as they launch into atmospheric new single ‘Spider Baby’. 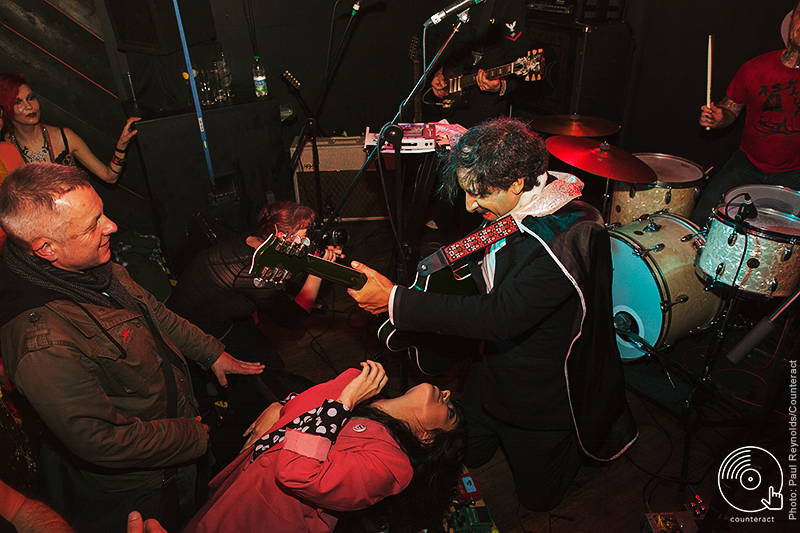 The swinging rockabilly bass and surf guitar set the scene. Kid’s mischievous vocal delivery echoes Vincent Price. With each new song he crafts a twisted, horror-movie narrative. Tales of time travel, gender-bending and ‘La Araña’ the Mexican spider goddess are recounted, all the while Ron Miller rattles away on the kit. Guitarist Mark Cisneros delivers red hot Mosrite tones, especially on the snarling ‘Psychic Future’, where he is offset by the glossy slide guitar of Kid Congo’s Grestch. Mid-way through the set, Cisneros breaks a string, and beckons one of the Mekons to do a swift string change mid song. 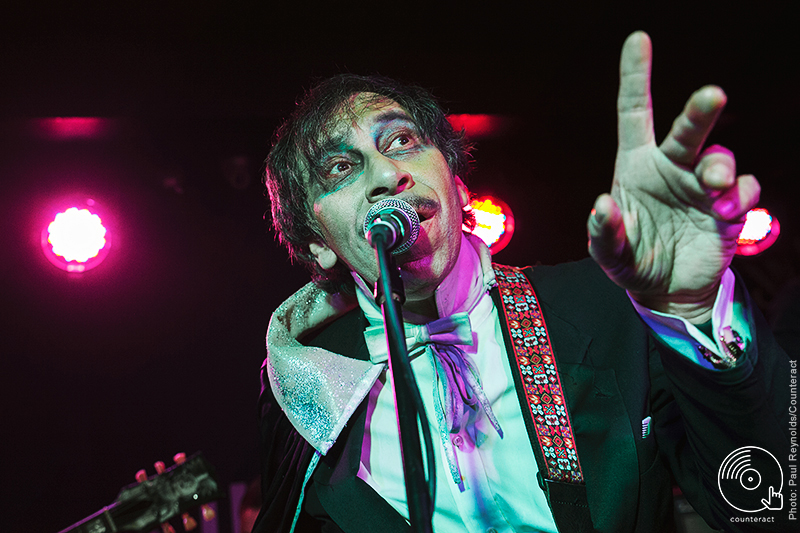 It’s a testament to the consistency and authenticity of Kid Congo and the Pink Monkey Birds catalogue that songs by Kid’s former groups The Cramps and The Gun Club slip seamlessly into the set list. The twisted riff of 2015’s ‘El Cucuy’ morphs into ‘New Kind of Kick’ in front of a joyous crowd, while an encore of ‘Sex Beat’ is a perfect (and eagerly demanded) choice. When the audience finally allow the group to leave the stage, Kid lingers to chat to the throng at the merch stand. He is a garage-rock gentleman if ever there was one. 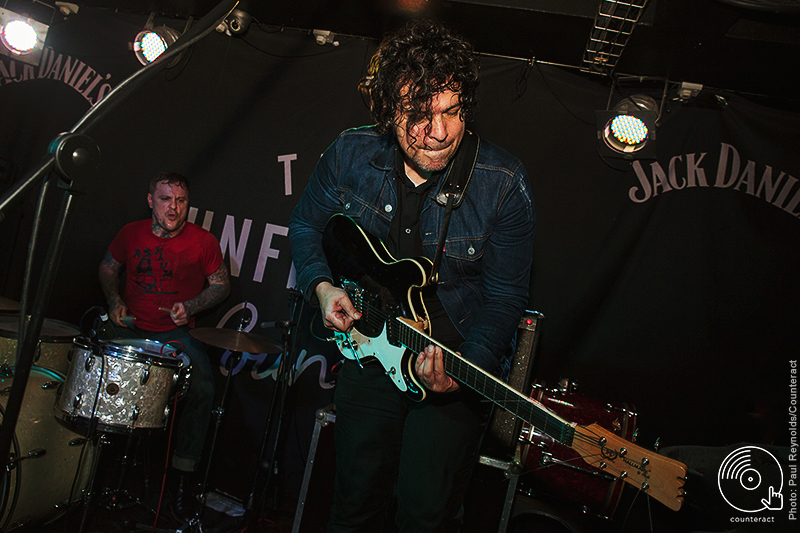