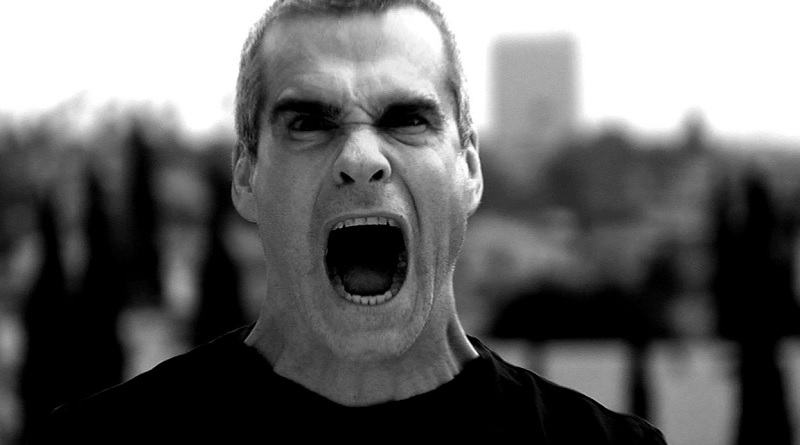 This is an odd time for a music. The festive period was like an advent calendar of shit, with a different musical luminary passing on into the night behind each window. We were looking for a pick me up, and it was found, as it so often is, in the most unlikely of places.

Henry Rollins begins his set with an apology. He’s famously had a mixed history with Britain, but he’s been here a fair bit over the last few years, just not in Birmingham. It’s been years since he last visited our fair city, and he feels bad about it. He likes the Midlands, and to justify that assessment, he reels off a list of his favourite bands from the region, some of which he shares anecdotes about.

He was 20 minutes into his introduction before you realise that actually he’s already 20 minutes into his acclaimed spoken word show. Flowing seamlessly between years, albums and stories, the Birmingham Town Hall crowd are treated to near enough three hours of hilarious and heart‐warming tales, beginning with a couple of segments regarding his friend, Lemmy, and his hero, Bowie.

A highlight of the show was an account of the time David Bowie recognised Rollins in a festival catering tent and put him in touch with the late, great Lou Reed so they could discuss working together. There’s little point in recounting the whole story, but it was a sombre and warm memory of his, of the time a man got to eat lunch with his hero, and that’s pretty cool.

Lemmy stories played a huge part in the show, understandably so, as the two had enjoyed a long friendship leading right up until the Motörhead frontman’s death a few weeks ago. Ranging from hilarious booze-fuelled hedonism to poignant examples of a guy being there for his mates, the audience was given a rare and touching glimpse into the otherwise private life of a great man.

Whilst stories old and new about Rollins’ extended rock n’ roll family are clearly the most entertaining part of the show, it was interesting to see him discuss some of his musings on the world today, and his thoughts on racism, sexism and equality yield some of the biggest reactions of the evening, not least a standing ovation as he left the stage. He’s famously very opinionated, and if voicing those opinions puts a couple of better people in the world, then maybe we should listen.

One of the closing parts of the show detailed the time Henry Rollins lay in a trench on Antarctica surrounded by wild penguins listening to a Stooges album so that he could say he’d done it. Doesn’t sound like the epitome of punk rock fury we’ve come to expect from the singer of Black Flag, right? Wrong. That’s punk rock as fuck. That just makes you want to go to Antarctica, surround yourself with wild penguins and listen to a Stooges album.

It was a thoroughly interesting evening. Henry Rollins is a class act and you’d be hard pushed to find somebody who moves in his circles who can turn their hand to a stand‐up comedy show as successfully as he has. This show no doubt changes at every venue he tours, he has an arsenal of
stories that means he struggles to leave the stage, almost like a hyperactive child. “People are always surprised,” he says. “They think I’m a lot taller.” Well tonight, sir, you were.