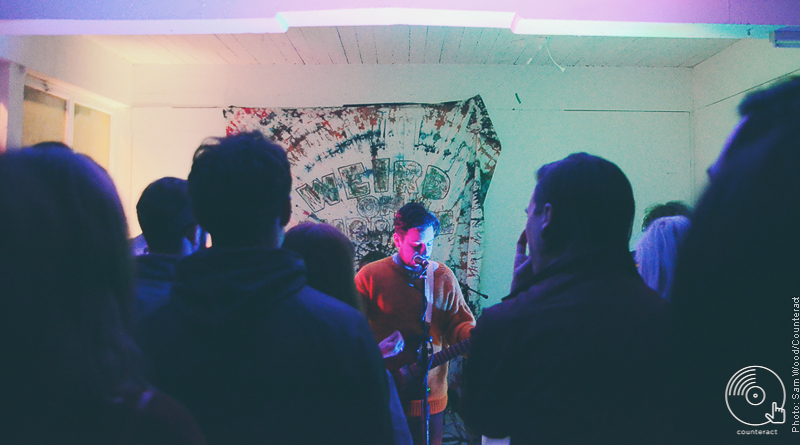 The gig’s inconspicuous location was a fitting reflection of the Birmingham music scene itself – out of view and unknown to most but well-appreciated by those who do know about it. The Stryx Gallery is another addition to Digbeth’s warehouses-cum-exhibition spaces-cum-gig venues and was the ideal location for the LP launch and inaugural gig for Weird On Purpose, Birmingham’s brand new record label which has certainly been a long-time coming. Weird on Purpose is the little brother of locally-endeared promoter This is Tmrw with the two sharing a few team members. The gig happened to fall on Record Store Day and although not an official event exemplified what the music industry should be about – home-grown and locally-owned music. 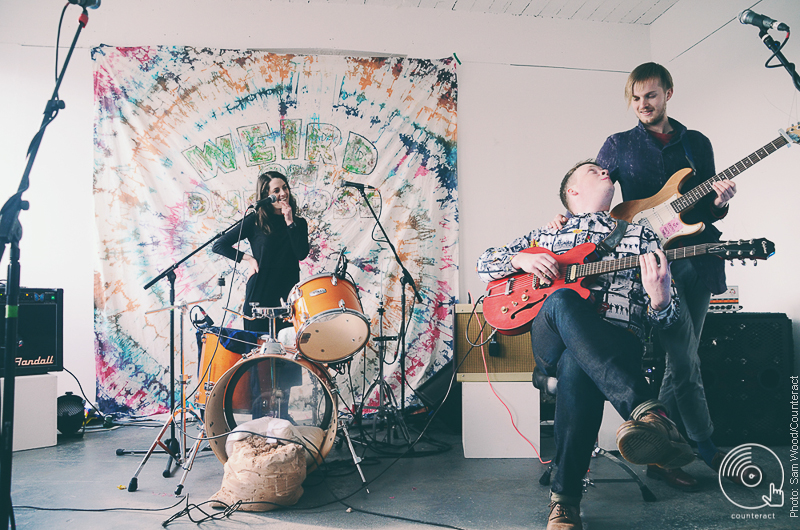 Proceedings kicked off at 4.30PM with three-piece The Bank Accounts who played what I guess can only be described as a pretty unique brand of witty, melodic indie pop. The Bank Accounts are one of those refreshing bands who don’t take themselves too seriously;  hopping around the stage singing abstract songs with choruses like “Some of my best friends are girls and your mums a woman too.” Those are the memorable lines from a song called ‘Girls,’ which frontman Benjamin Kane dedicated to the ladies in the room. Their track ‘I Don’t Know’ features on the Weird on Purpose LP and is a catchy indie number a little reminiscent of The Rakes. 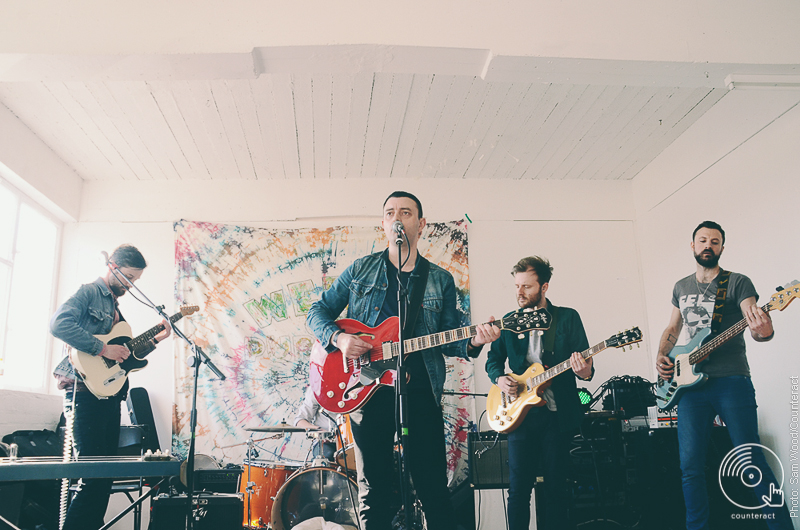 The second city’s next musical offering came in the form of Faux Palms, bringing a slightly heavier sound and anthem-worthy rock music. Frontman Rick Wellings formerly of locally-regarded band The Bombergs reminded us exactly where we were, calling the album launch “The Aston Villa Relegation Consolation Party.” Their penultimate track, the soul-searching ‘Isn’t Gonna Work Out,’ was an accurate description of Villa’s relationship with the Premier League this season. Faux Palms closed their set, performing ‘Momentum,’ a more upbeat track defined by a sleek layering of pedal steel guitar and track 8 on the LP. 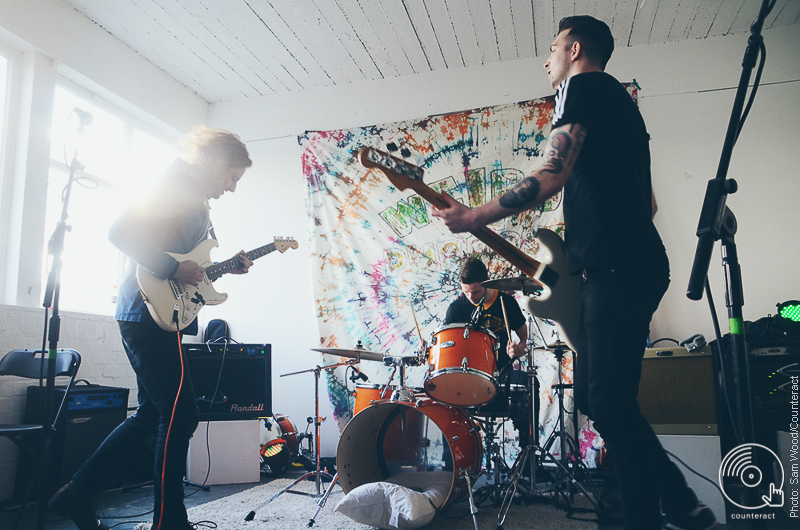 As golden hour started to set in and the setting sun’s glare beamed through the venue, garage rock group The Terror Watts took to the stage to grace the audience with a heavy dose of thrashy guitar riffs and space rock vocals. You can tell that The Terror Watts are veteran performers as they put on an energetic live show that sees the band jostle into the audience. Even the tie-dye Weird on Purpose sheet hanging at the back of the stage takes a little garage-rock beating and is left hanging by a thread by the end of the set. The explosive psych-rock of The Terror Watts contrasts greatly to the music of the first two acts, showcasing just how eclectic Birmingham’s music scene is. 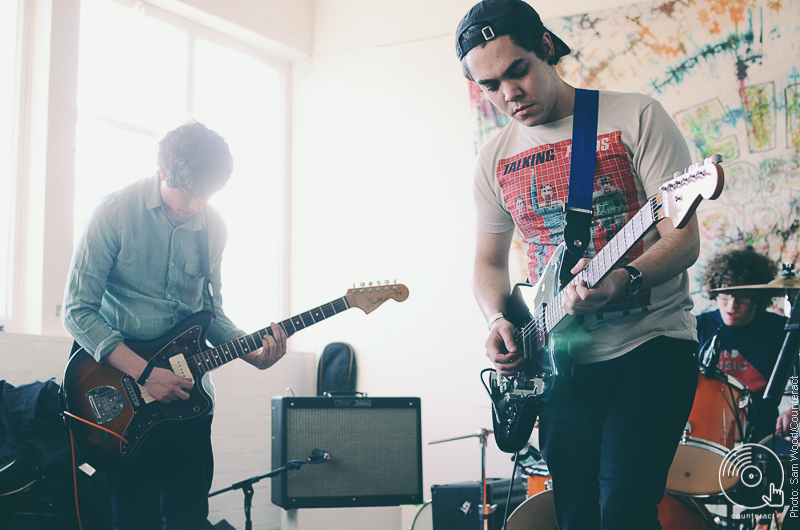 And to add to the eclectic mix, Repeat of Last Week, a self-described “non-smoking,” band came to the stage armed with a stellar pair of classic Fender Jazzmasters to play some sweet indie melodies. Track 2 on the LP, ‘Proud Nothing Existence,’ by Repeat of Last Week is a radio-friendly tune with vocals that remind me of The Sunshine Underground. 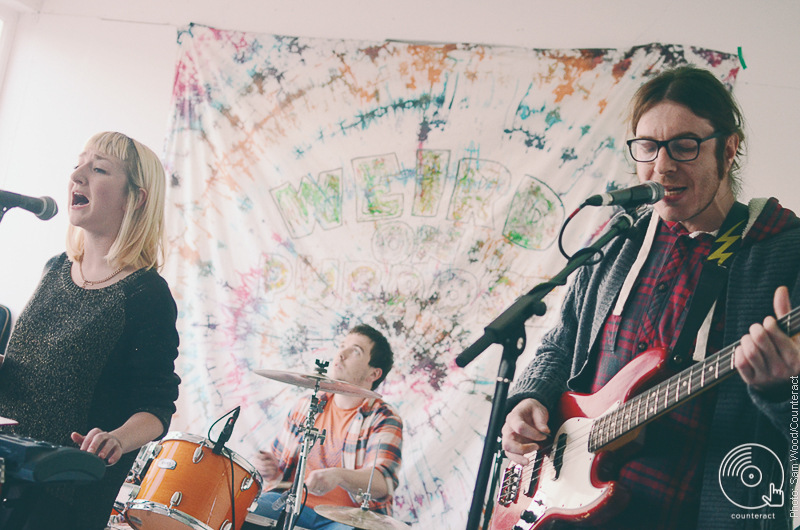 The room is getting more crowded and the cans of booze are flowing as the evening draws on and Venkman up the tempo a bit with their brand of melodic funk. Frontwoman Kate plays with confidence as do the rest of the group who are evidently well-trained musicians, playing around with experimental riffs and tempos. The male and female harmonies blend together beautifully both live and in recording, Venkman’s ‘Tap Out’ is track 9 on the LP and is a great example of the songstress-songster duo’s talents. 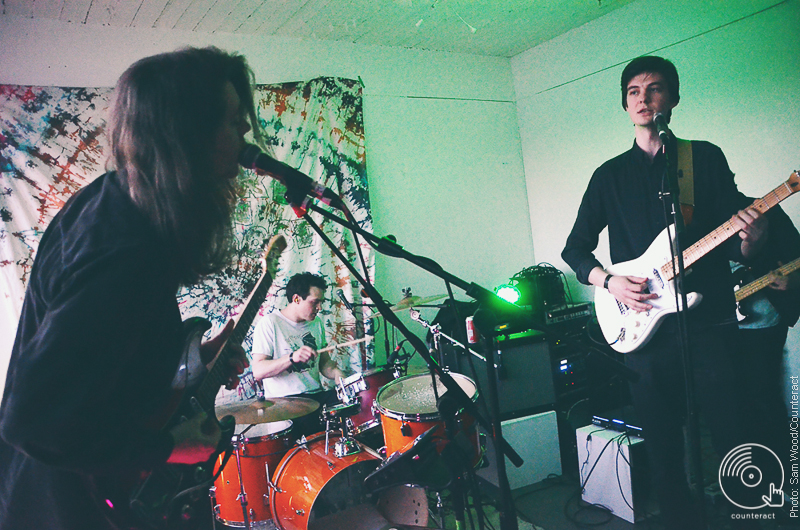 Following on from Venkman were Hoopla Blue, another band pretty accustomed to playing the Birmingham circuit. Repeat of Last Week’s bassist takes to the drums highlighting how all the bands in Brum seem to somehow know each other. Their sound, however, contrasts with Repeat of Last Week, with a little more synth and an almost art-rock feel. Hoopla Blue suggest that they might just be the “tallest band in Birmingham,” before closing the set with their track ‘Rotten Sodden Loot,’ which features on the LP. Don’t stop there though; the group recently released their EP Mothers which is definitely worth a listen. 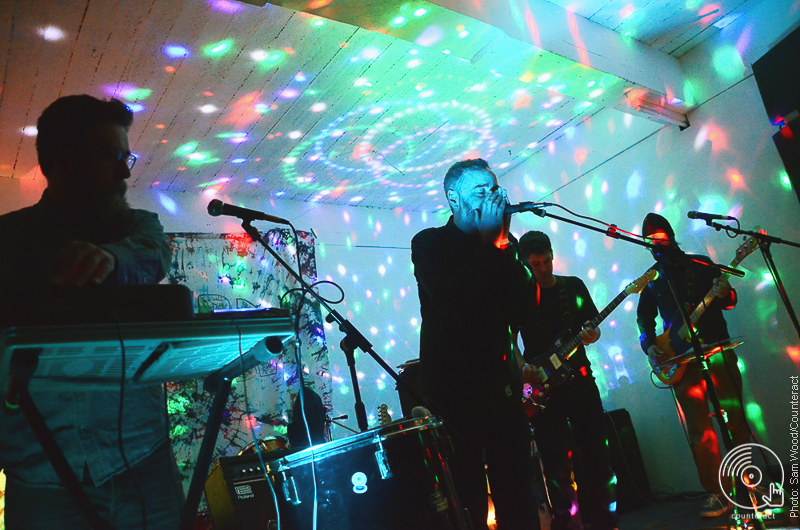 Health and Efficiency added to the musical melting pot, eschewing the drum kit in favour of a drum machine and percussion instruments. Their music is undoubtedly experimental with the occasional hark back to New Order owing to the pre-programmed beats and thick bass. Health and Efficiency originally formed in 2009 and it’s clear that in seven years or so of playing, they have really honed in their sound. Health and Efficiency’s music provides the perfect soundtrack to the evening as night sets in and the Birmingham city scape can be seen from the windows at the edge of the venue. Health and Efficiency contribute their slowed-down, reverb-heavy track ‘Time,’ to the ‘Weird on Purpose’ LP. 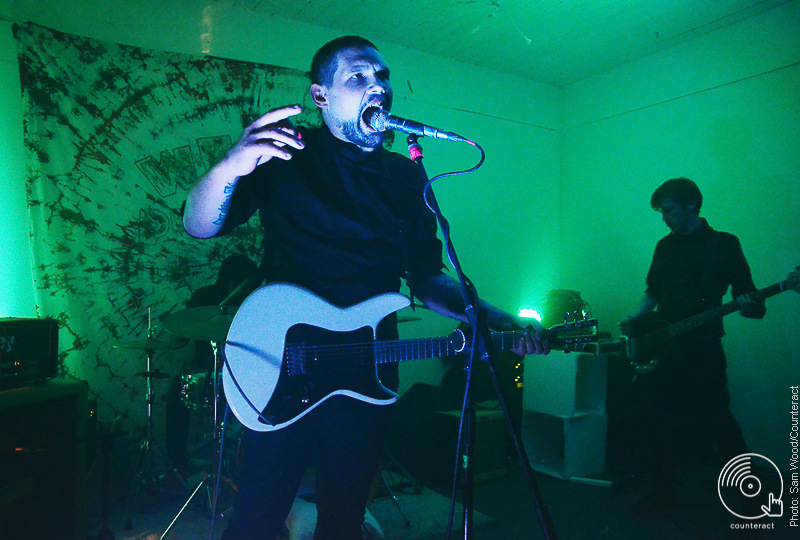 False Grails took the baton from Health and Efficiency and the music got a lot heavier. As with all the acts, False Grails have an intensely captivating stage presence and the home crowd are transfixed. False Grails offer a nice touch of metal to the compilation LP with their headbang-inducing ‘Broken Lock,’ and they thrash and scream their way through an awesome half hour set warming the crowd up for headliners Sunshine Frisbee Laserbeam.

Anyone who has even dipped their toe into Brum’s burgeoning music world would have heard of our final act. Scattered among the audience are band stickers and t-shirts flaunted by crowd members showing their appreciation for Birmingham’s finest psychedelic rock band. Sunshine Frisbee Laserbeam’s frontman Pete strolls onto the stage, plugs in his guitar and tunes up before slitting a hole in a glittery sheet with a Stanley Knife and putting it over his head to wear as a cape; he chucks the same over to drummer Ralph to don. With an awesome crescendo of cymbals and reverb, Sunshine begin. 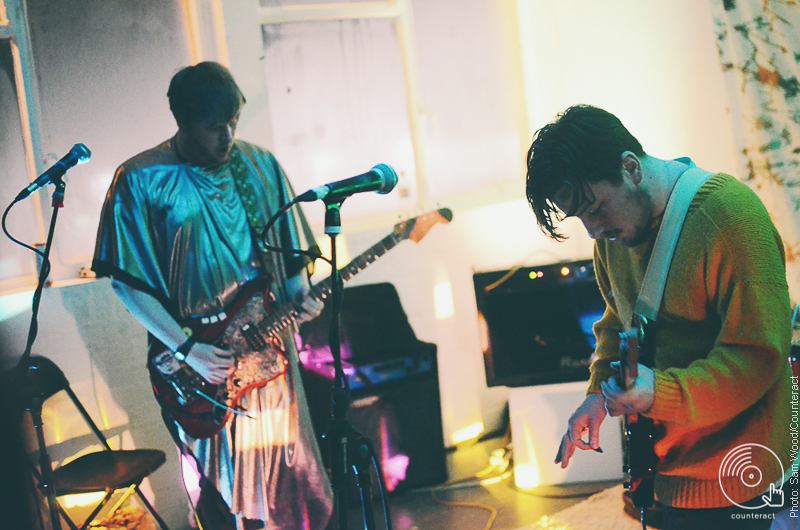 The bands three guitarists shred their way through the set, complementing each other wonderfully. You wouldn’t even notice the band lack a bassist. Other bands may need one but Sunshine don’t. The group are also missing something else that a lot bands have – pretention. Sunshine play like they were born to it, invigorating the crowd who belt out lyrics like “Everybody sucks…everybody just does what they’re told,2 the chorus from their track ‘Everybody Sucks’ which features on the Weird on Purpose LP. Sunshine’s brand of unadulterated psych-rock truly is a spectacle when played live. 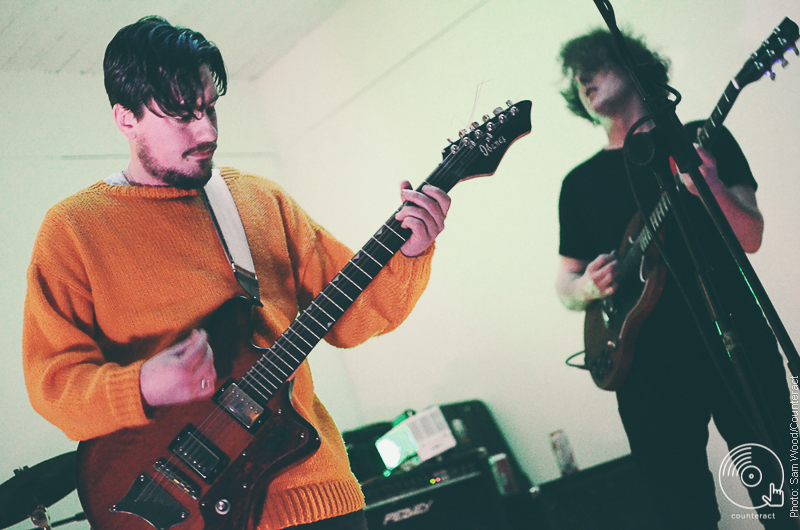 In an evening of outstanding and original music, Sunshine are the ideal band to top it all off and the crowd seem like they never want it to finish. And indeed, with Sunshine’s impressive discography spanning over four years, they probably could play all night. Nevertheless, all things must inevitably come to an end and Sunshine make sure the night ends on a high.

Members of the audience sing along to all-time favourite ‘Teeth,’ starting a little slow before going into a blaring instrumental that sees guitarist Andrew disappear into the crowd. He is lifted up and crowd surfs across the room, the fret of his guitar almost touching the ceiling but even so it seems like he doesn’t miss a note and the sound is still perfectly on-point. Not to be outdone, guitarist Dave is quickly hoisted onto the shoulders of an audience member who’s scrambled his way on to the stage. The show literally comes to a crashing end as Dave falls headfirst from shoulder height. Despite falling around 5ft, he continues to play to the last note, lying on his back at the front of the stage where he landed. 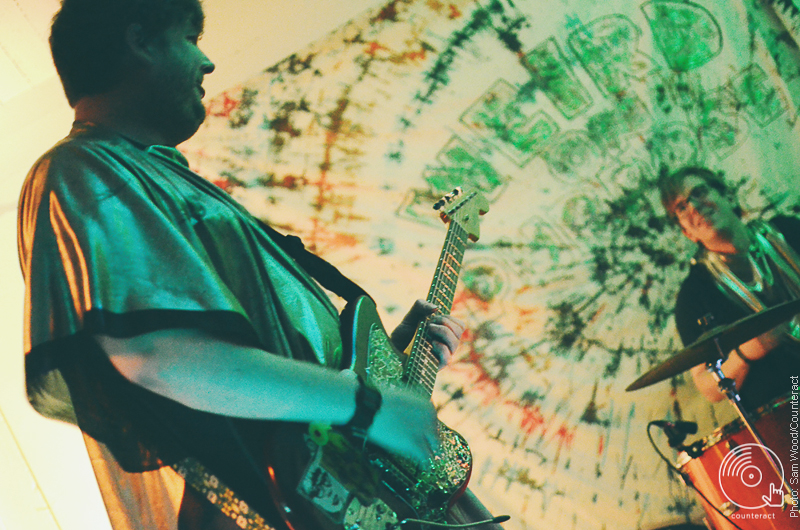 Thankfully, Dave manages to get back up but the show is sadly over. Sunshine make sure to thank everyone for coming down and the crowd reluctantly begin to sidle their way out, already anticipating the next Weird On Purpose show.

In an era when music critics are often lamenting the death of music as a result of the iPod generation, it can without a doubt be said that the Weird on Purpose team and all the musicians that played on Saturday certainly proved the naysayers wrong. The label truly did put on a fantastic night which finally gave Birmingham’s local musicians the recognition they deserve. I, for one, cannot wait to see what else they have to offer.