A ‘proper’ Birmingham Peace gig is notoriously hard to come by. The Worcester-born, Birmingham-made, London-residing and wherever-else-based quartet don’t play by the usual rules.

“200 gigs a year” and a “Facebook algorithm” is apparently the key to success, according to frontman Harry Koisser. But, much like their past three records, Peace are always there to break the mold.

“[All the record producers say] ‘you need to do 200 shows a year if you’re going to crack it’ which is kind of true, but we just can’t do that. Concentrating on these two shows is what we should be doing now,” admits Harry. Jokingly calling their two-date UK stint a ‘World Tour’, the band are crossing over every line set by the conventional, focusing on a fan-service-of-sorts tour to two cities who have backed them heavily.

“We had neglected to do a headline show in Birmingham, for an alright size at least. At the end of our first album cycle we played a huge one, on the second album we played Wolverhampton Civic Hall and then two shows in the basement of the O2 Institute, followed by O2 Academy2 as a warm up, and a Sunflower Lounge secret show. We asked ourselves, ‘when are we actually going to do a gig in Birmingham?'”. 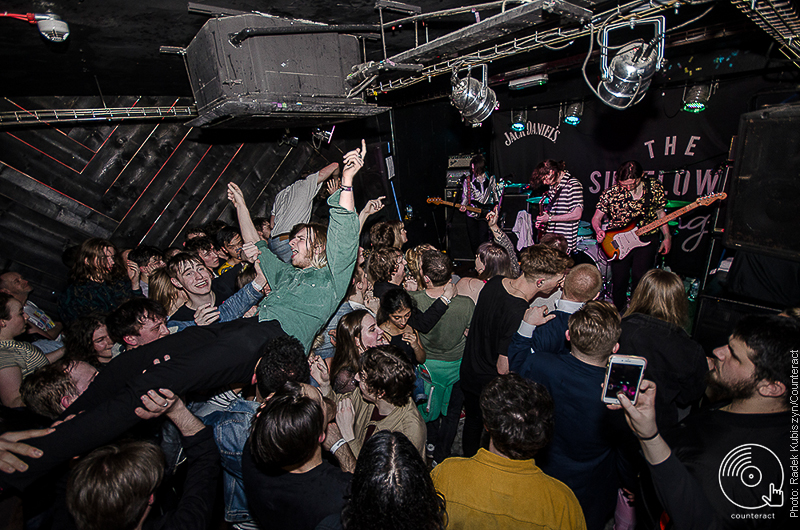 Peace live at The Sunflower Lounge

Not that there’s any problem with playing smaller venues, as some of Peace’s more intimate shows have been their best yet. After a few secret shows, and a “serendipitous” acoustic Sofar Sounds at The Symphony Hall, the need for Birmingham fans to be one of the lucky few in their gigs grew more and more.

“It’s cool doing a gig with around 100 people, but we know not everyone can get in. I don’t like doing what is expected,” Harry added. “There’s a specific thing you can do as a band which is the same for every band; the same set of tours, same strategy that works in this era. Ive just tried to avoid that as much as possible. Its so boring.”

With this mind set, ‘Kindness Is The New Rock and Roll’ was a complete clean slate for Peace. Part written in a secluded house in the fields of Herefordshire, a stark change from the sometimes grey, often busy streets of Birmingham. “Kindness is something totally new and off on a tangent, we didn’t do anything for three years and then we went to Woodstock and just made an album. We wanted to just see what happens, like how you make a debut album. We weren’t considering what the band was, we didn’t think about forcing a 10 minute psych prog epic or something…”

Despite this pilgrimage to Woodstock (via Herefordshire) Peace still firmly have their roots planted in Birmingham, whether they like it or not. “I do find myself coming back to Birmingham, but its one of those things where its my home so I’m haunted by horrible memories, but also good times, depends how I’m feeling. If I walk from The Rainbow across to Adam & Eve and even to the industrial wasteland of the city centre I’m bombarded by memories. Good and bad, that’s the coming of age. There’s the transition as well from being completely penniless living for whatever day of the week, trying to wear as much faux fur as possible, to ‘I’m in a band around the world.”

Onto a phrase that divides Midlands music fans, that B-word that you couldn’t escape hearing during the late twenty tens. B-Town was, and is, a movement so big it’s got its own Wikipedia page. A phrase that wouldn’t have so much of an impact on this city’s music if it was for the likes of Peace, Swim Deep and the like. You’d be right to assume Harry would be sick of the word by now, but he explained its completely the opposite.

“People roll their eyes at B-Town, but its in our blood. A techno DJ I know called Joe Ashworth used to call Birmingham K-Town, so that’s how we [Harry and Cavan from Swim Deep] called it B-Town. As soon as it was a scene, everyone was calling it shit. It made you feel guilty for doing well, but I don’t let anyone talk shit about Birmingham.”

‘Should I go back to work? Should I get a job at Kidderminster Carpets?’ were the thoughts running through a young Harry’s head, but by that point, Peace had already left for pastures new when B-Town was gaining momentum.

Today’s newer scene members may think they’re ahead of the curve with Madlands, a new wave of Birmingham bands following in Peace’s footsteps. However, it was a word to rival B-Town, as Harry explains: “I coined B-Town and Austin [Swim Deep] coined Madlands. He’d always say ‘we’re not from B-Town we’re from the West Madlands’. Today’s bands are doing it exactly the same as how we were doing it. Birmingham is a perfect playground for it. Madlands is a great name, I’m sure there’s a load of mad heads in it.”

Birmingham’s newer bands will naturally take a leaf from Peace’s book; countless gigs have had covers of Peace thrown into the mix, all with a boisterous reaction from crowds. “I hope they do follow in our footsteps, I mean playing ‘Money’ worked for me so why shouldn’t it work for them?”. The one bit of advice Harry has for these newcomers? “You need to do the fun stuff and make this whole thing appealing so they [fans] want to wear the shirts and kick about. Do all that with your left, and with your right stay up all night, study song craft and really dig into it. Research why The Doors are so good?, hone your craft and whittle away as the songs can only do so much. The bands who rise out of the sludge always have the best songs.”

With three albums, fervid crowds lapping up every secret gig in intimate venues and a legacy in the city that some of them left behind, it may sound like Peace have it all worked out. It turns out, they don’t. But that’s the magic of it: “Do I know what Im doing? Yes, but no. Is this worked out or completely winged? Both. Let the whole thing be chaotic, that’s the idea, its controlled chaos but that’s the idea,” explained Harry.

“We feel incredibly lucky that we’re driving 100 miles an hour yet haven’t touched the steering wheel once and haven’t crashed.”