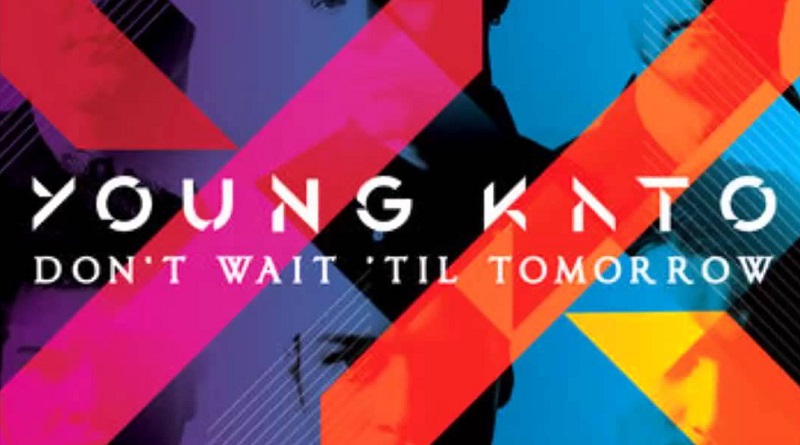 Indie has become word which, all too often, acts as a kind of dismissal. Or a nebulous, lazy way of categorizing a band who aren’t edgy enough to be Alternative, but who equally aren’t pop-y enough to be pop. A musical purgatory, if you will. Young Kato have received their fair share of the Indie treatment, but after hearing them play an accomplished show at The Rainbow in Birmingham recently, and on giving their Debut album Don’t Wait ‘Til Tomorrow a good listen, I’ve found that they transcend Indiedom with genre-shifting ease.

‘Sunshine’, the opening track, has all the makings of the summer feel-good hit; off-beat, surging drums; catchy synth and guitar hooks; and an anthemic chorus. Throw a cheeky whistle into the mix, and you have a festival hit. Swiftly following this comes their stalwart anthem ‘Drink, Dance, Play’, full of Skins-esque revelry, with “wooaahs” and sing-alongs in abundance and a striking, seldom-heard piano chord progression underpinning the texture from Harry Steele on keys. ‘Children of the Stars’ is in a similar vein lyrically, and is just as catchy in terms of sing-alongs, but has a polished, streamlined texture, reminding us that they are very much students of 80s pop – with a healthy dose of Aha! emanating from Tommy Wright’s vocal lines. Delving yet further into the 80s soundscape, Ultraviolet is a dark, silvery piece of well-crafted pop, showcasing the broad range of Wright’s vocals and the band’s ability to piece together varying styles to make a unique sound.

‘Stephanie’ is a depart from the carefree optimism of a lot of the other tracks, and is a large change of speed from the rest of the album, with sparser drum and bass lines from Sam Henderson and Joe Lever, and sweeping strings replace the familiar synth tones. Most of the album was produced by Dan Grech-Marguerat, who’s produced artists such as Radiohead, The Vaccines and Kaiser Chiefs. But for the song ‘Runaway’, the band had Peter Miles record and produce, to achieve the specific sound they wanted on the track. Recorded on analogue equipment as opposed to digital, Runaway has more of a natural acoustic to the sound, with more emphasis being given to the vocal harmonies and less of a synth presence – which is a welcome change of speed towards the end of the album.

With the festival season upon us, and an album full to bursting with anthemic choruses and catchy tunes, Young Kato are a band to watch.