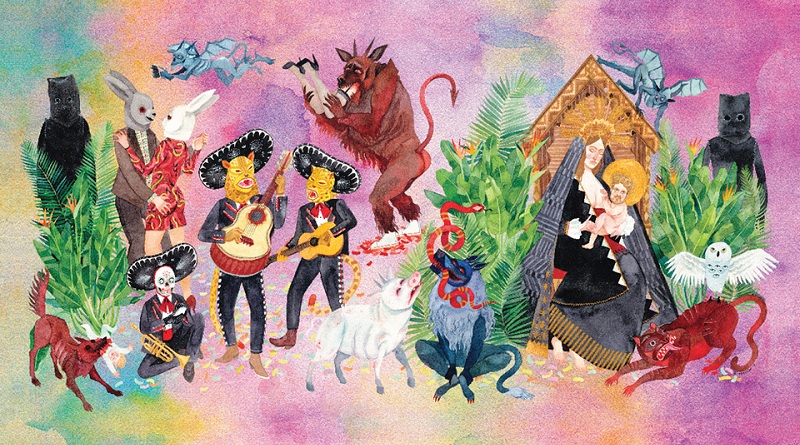 Josh Tillman resurrects his twisted alter ego to great effect on I Love You, Honeybear.

The piano, violin and steel guitars on the title track gives a sentimental edge to lyrics that capture heartfelt commitment in the face of disillusionment, “you’re the one I wanna watch the ship go down with”. This ‘you and me against the (awful) world’ approach pops up again in ‘Chateau Lobby #4 (In C For Two Virgins)’: “I haven’t hated all the same things as somebody else since I remember”. Misty’s warped sexiness is evident in the admission, “I wanna take you in the kitchen, lift up your wedding dress someone was probably murdered in”. The psychological and physical vulnerabilities of giving oneself to another is explored in ‘When You’re Smiling and Astride Me’: “I’ve got nothing to hide from you, kissing my brother in my dreams or finding God knows in my jeans”. And the problems of being away from a loved one is explored in the slow swing of the clarinet-infused ‘Nothing Good Ever Happens At The Goddamn Thirsty Crow’.

‘True Affection’ adds synths and electronic drumbeats to focus on the negative impact of techonologies on human interaction. ‘The Ideal Husband’ has a siren to announce a variety of confessions in the face of being exposed by an internet leak: “I’ve said awful things”. The piano ballad ‘Bored in the USA’ uses canned laughter to drive home the emptiness of the American Dream: “They gave me a useless education… keep my prescriptions filled and now I can’t get off “. This theme is developed in ‘Holy Shit’, where “infotainment” bombards “consumer slaves” but “no one ever really knows you and life is brief”.

‘The Night Josh Tillman Came To Our Apt.’ is a pretty chime of a tune but its lyrics end in fetishized violence, “I obliged later on when you begged me to choke ya”. ‘Strange Encounter’ chronicles a near-death experience with measured hope, “at least we’ll both go on living”. ‘I Went to the Store One Day’ tells the story of finding love during a chance encounter. But even when finding love the lyrics turn fatalistic and fearful: “Don’t let me die in a hospital, I’ll save the big one for the last time we make love”.

I Love You, Honeybear is a brilliant take on the universal themes of love and death from within the context of consumer culture. Father John Misty may be an assumed persona but there’s nothing fake about Tillman’s music. Every confession strikes home as raw and honest on this deeply affecting album.