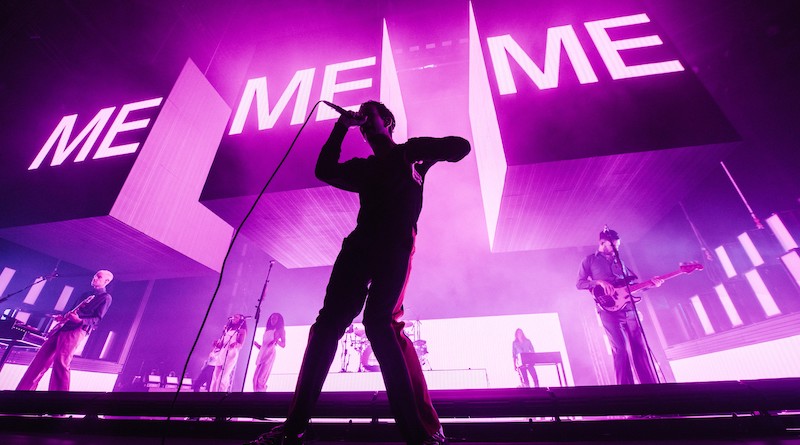 The biggest band in the UK, on their biggest tour to date, hit Arena Birmingham on January 23rd. The result was one of the must-see live shows of the year.

It’s clear that pop-rap prodigy No Rome has benefited enormously from his Dirty Hit signing, not least since it has landed him a spot on the biggest tour of the year. Even as the cavernous stage of Arena Birmingham threatens to envelop him, Rome Gomez can’t be deterred, blasting through a short set of glitzy, smooth R&B featuring material from all of his 3 EP’s, including ‘Saint Laurent’ and set closer ‘Seventeen’. By the end of the latter, Gomez has drawn what energy he can out of the languid early crowd, and retreats. There’s no trace in the set of his biggest hit ‘Narcissist’, which directly taps The 1975; he performs that later, when he’s brought out during the main event.

At the start of last year, Pale Waves were hotly tipped as the next big thing. 12 months later, they’re still capable of drawing a crowd and putting on a show, though it feels like they’re still drawing from the same setlist; a pool of shimmering pop-rock that almost seems at odds with their pastel goth posturing. October’s My Mind Makes Noises produced the minor hit ‘There’s a Honey’, proving that Pale Waves are capable of producing a catchy anthem, and live it sends the super fans at the barrier into a frenzy. Maybe they’re destined to be a cult phenomenon, or maybe there’s more in-store down the line, only time will tell.

With their third album, A Brief Inquiry Into Online Relationships, The 1975 started turning the heads of the unconvinced, with its not-so-subtle meditation on love in the information age. No surprises, The 1975’s live show feels like a search for just what they mourn on the album, a sense of something real. As Matt Healy throws himself around the stage, screaming for the audience to ‘Give Yourself a Try’, enormous screens and innumerable lights bracket the band on all sides but the front.

That they are performing from within a metaphorical phone screen becomes literal during a delightfully weird performance of ‘The Ballad of Me and My Brain’; glitched-out error messages permeate an incendiary rendition of ‘I Like America and America Likes Me’, yet at no point does the relentless “we live in a society” sermon threaten to overpower the sense of euphoria unique to big arena productions. The only time crowd connection is broken is during the overlong, if eventually enthralling, ‘How to Draw / Petrichor’, which serves as a reminder that we are indeed watching humans trying to work out how best to present their new material. 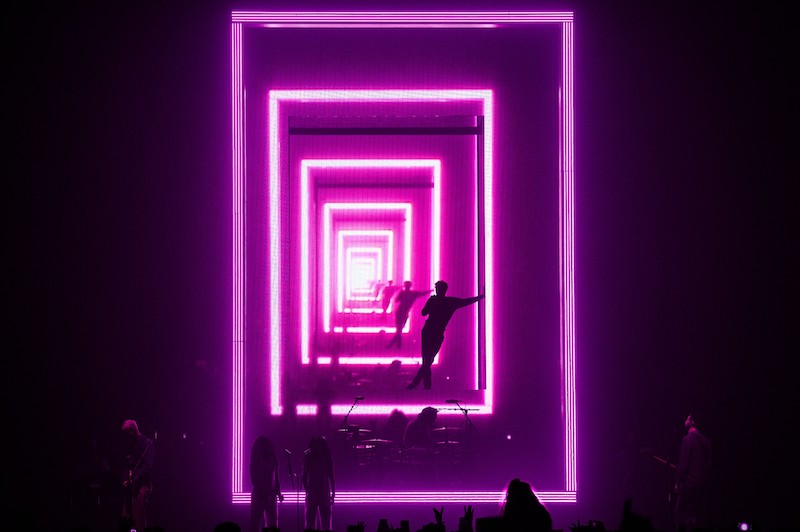 The move to huge arenas that came with their sophomore record hasn’t stopped Healy from seeking out connection with the audience: a subdued performance of ‘fallingforyou’ goes out to a newly engaged couple, and ‘Robbers’ – at this point a generational torch song – sees half the arena on the other’s shoulders. The zenith of the set comes with the band’s greatest songwriting achievement to date: ‘Love It if We Made It’ feels like an urgent call-to-arms, set against a kaleidoscope of #trending topics, from a beach of drowning 3-year-olds to drone strike footage to MAGA hat Kanye.

As exhausting an experience as scrolling through social media for just a bit too long, the Music for Cars stage production serves as an audio-visual representation of constant information overload. In front of it, four lads from Manchester perform their hits for a packed arena of adoring fans. And whether it be the mindless kitsch of ‘Girls’ or the smooth balladry of ‘Sincerity is Scary’, The 1975 throw themselves so wholeheartedly into every song of the set that they put themselves solidly above reproach. 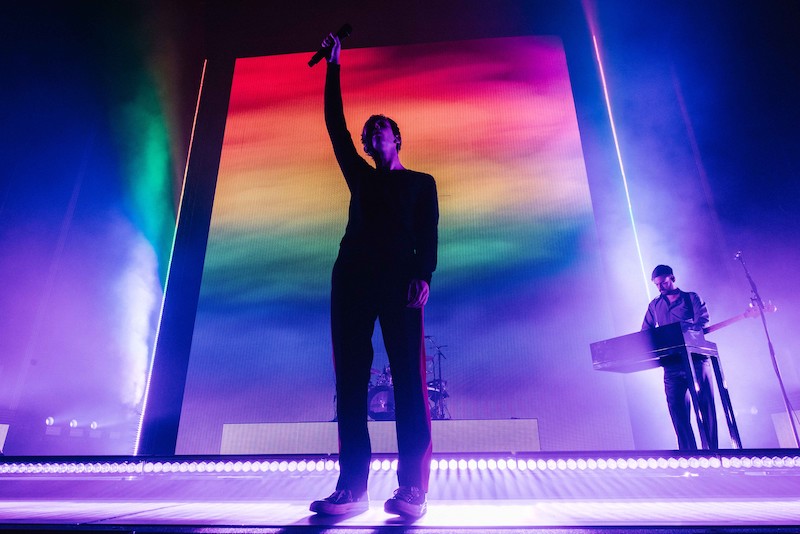 “We’re just getting started, we’re gonna be on tour for a long time,” Matty tells the crowd, in an open invitation for those who didn’t get tickets to try again at the next opportunity. And so they should, because this tour is too immense to be missed.

As the euphoria of eternal set closer ‘Sex’, which captures the abandon of its inspiration ‘All My Friends’ perfectly in the huge arena setting, crescendos to a grand finale, the screen behind the band beams out the words that they want to be remembered by; a fitting conclusion to the show and this review.