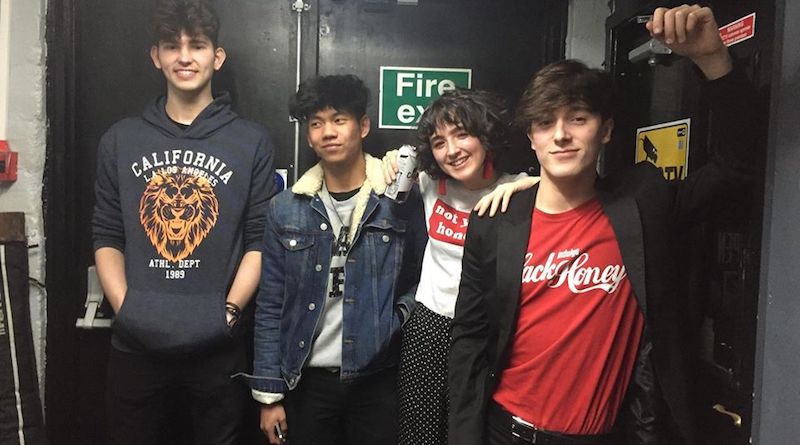 Echo Beach! are one of Birmingham’s most exciting new bands. As their new single ‘She’ stuns and delights listeners across the country, Beach babe Ross Carley spoke to Sam Lambeth about exclamation marks, sad lyrics and moms.

Echo Beach! needed something to stand out. First, there was the Martha & the Muffins song, the classic ragtime riff that gave the Shrewsbury rockers their moniker (inspired by one of the band member’s moms, natch). Secondly, there were already two bands plying their trade with the same ruddy name. It probably would have been easier to just find another sobriquet, but the band wouldn’t be deterred. “I guess the Panic! At the Disco jokes will never get old,” Ross Carley sighs.

If they may now be tethered to Brandon Urie’s globe gobbling emo giants, it ain’t exactly a bad thing. But Echo Beach! needn’t have worried about trying to stay unique – their music is full of heart, soul and grit, enough to take them from Shropshire chancers to Midland monarchy. Their new single ‘She’ has rocketed up every Spotify in the land, with its polished hooks and undeniably catchy chorus ensuring this is a beach that’s rammed all year long.

“The song is sort of about the one that got away,” Carley explains. “It isn’t a bitter song, but a note on how the eponymous character won’t change. It’s quite a relatable song really, because I do think it also captures the fun and happiness of a relationship too. We took a very Paramore approach to the song by contrasting these quite sad lyrics with a really funky bass line and catchy hook which we really like as a dynamic.”

‘She’ is one of many impressive songs Echo Beach! have in their arsenal. The four-piece have enjoyed a series of acclaimed gigs, and Carley feels they are definitely more comfortable in their sun-kissed skin. “Gigging has been so much fun, I feel like we’ve really come into ourselves more on stage especially over the last few months,” Carley grins. “We’re definitely improving as we go along with everything from sound to stage presence! I’d say when we first started song writing we had ideas that were very ‘school band’ and all over the place but since we produced our single and started writing more songs this year we’ve found a style that suits us quite well and people seem to enjoy.”

What follows will be more impressive gigs in and around Birmingham, more songs about the ones that got away and, no doubt, more exclamation marks. One thing is for sure, though – Echo Beach! will never end on a mere full stop.