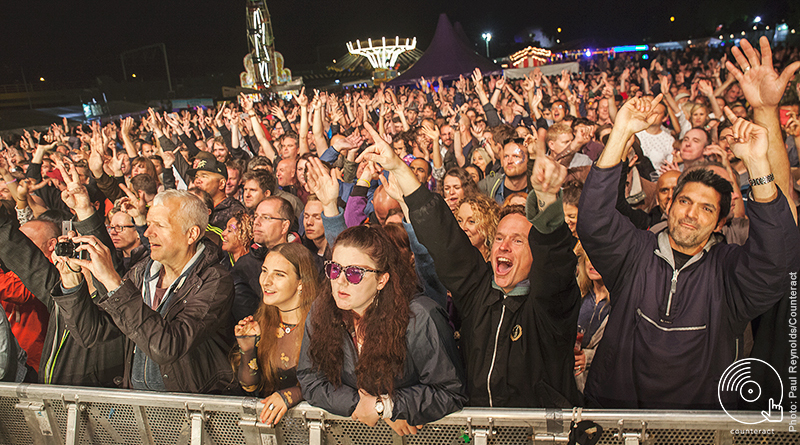 For commuters traveling in and out of Birmingham New Street station, Eastside Park, lying next to the old Curzon Street station building, usually offers a visual buffer between the low key warehouses of Digbeth and the towering high rises of the city centre. On Friday though, this green space was transformed into an urban festival as fairground rides, beer tents, disco caravans, gin huts and food vans from all corners of the globe nestled side by side with a main stage and a smaller second stage, serving up aural treats for the discerning punter. This was the first day of the inaugural Beyond The Tracks Festival, spanning the entire weekend and boasting such heavyweight headliners as Orbital, Ocean Colour Scene and Editors. 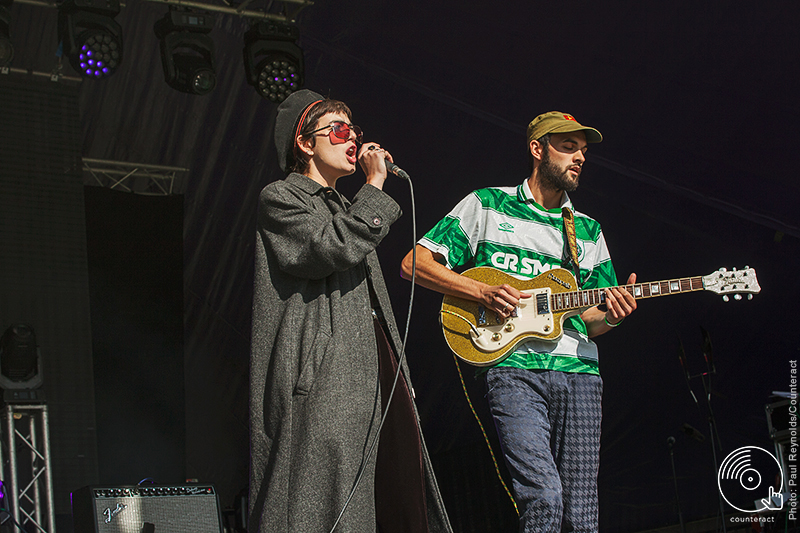 With Magic Door DJs Jukes of Hazard & Deano Ferrino kicking things off on the second stage, at 3:20pm it was time for the first live act of the day – Pixx aka 21 year old Hannah Rodgers along with backing band – to take to the domed main stage right next door. Her mix of Grimes style indie nounce with an 80s pop sheen complemented the so far sunny disposition of the site. Up ahead there were definitely grey clouds looming but for now the sun was shining and for the smattering of early birds this signaled a great start to proceedings. 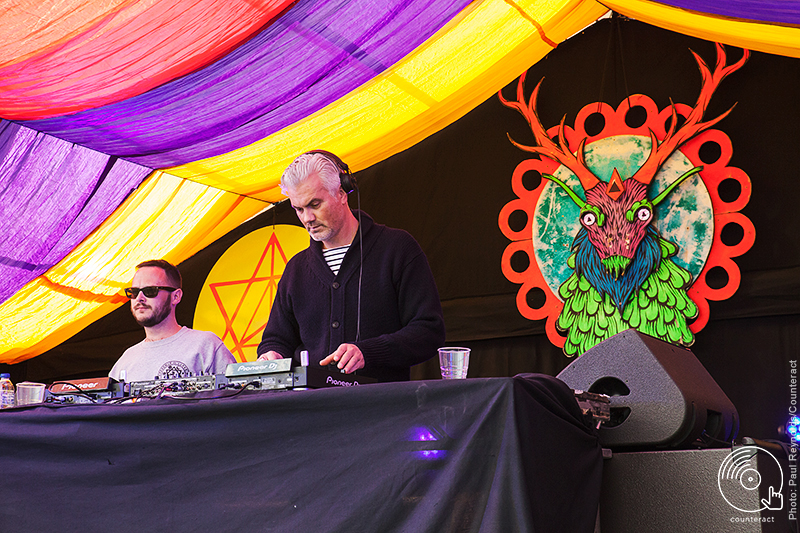 Leftfoot then took to the decks back on the second stage and all you had to do was literally turn to your left and you were in amongst the funk. Overhead workmen were taking breaks to peer over the top of scaffolding to take in the spectacle. Everyone wanted in on the action. 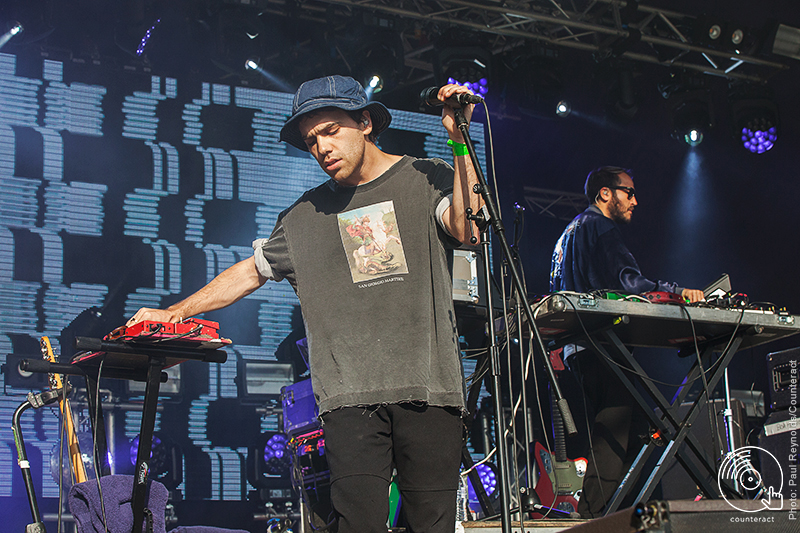 The second act on the main stage, Australia’s Jagwar Ma, really got the festival vibe going. By now there had been a large influx of people so there was a percolating atmosphere around the stage. The Sydney trio certainly delivered as their shimmering synth and bass sounds morphed into the funky electro groove of O B 1 which got the crowd moving, still thankfully with the sun shining down. Bringing some Antipodean sunshine in a sparkling bag they really got the party started, with tracks like ‘Give Me A Reason’, ‘Man I Need’ and ‘The Throw’, weathering any hint of a storm save for a few raindrops. With their sound incorporating the psychedelic meanderings of early Chemical Brothers through to The Beloved’s acid daze, they really were the right band at the right time and hats off to the organisers who got this spot on. Talking of hats, special mention must go to singer Gabriel Winterfield’s big blue floppy one which he wore so well! 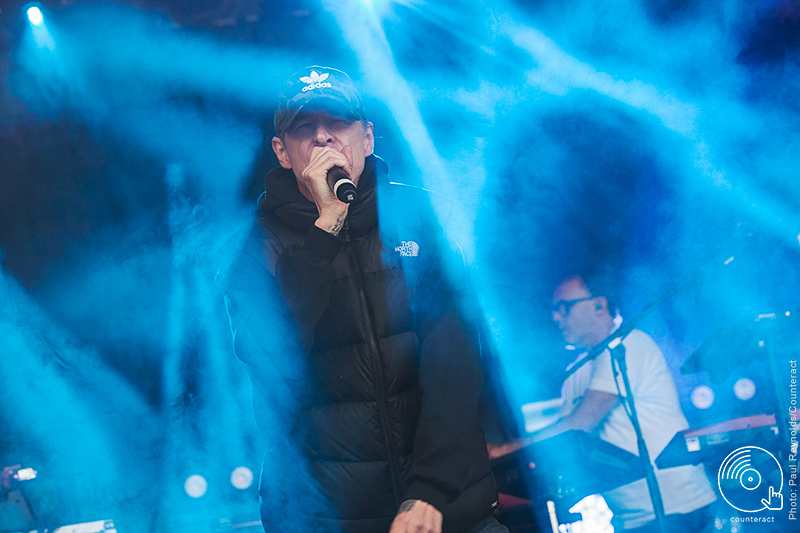 Another DJ interlude on the second stage courtesy of Higher Intelligence Agency paves the way for the mighty Leftfield to take to the main stage at 6:20pm to perform their legendary 1995 debut album Leftism in its entirety. The fact that you can get a hair’s breadth away from the stage yet still duck in and duck out without a) loosing friends, b) getting stuck, or c) spilling your pint, is a real bonus. As the Leftism logo slowly materializes on screen and Neil Barnes takes to the stage, a huge cheer comes from the now very large crowd. Earl Sixteen and Cheshire Cat deliver the tribal dub of opener ‘Release The Pressure’ to a sea of bouncing bodies. Electro bangers like ‘Song of Life’ and ‘Space Shanty’, reveal hidden depths when played out live and ‘Open Up’ still has the power and vitriol that it had when Johnnie Lydon first spat out those “Burn Hollywood Burn” lyrics. With a host of collaborators and live instruments, including the berimbau and theremin on ‘Afro Left’, there is much to keep the senses satisfied as the body moves to an irresistible beat. A triumphant performance that turns the energy levels up a few more notches.

Billed as a Faithless DJ set, Sister Bliss takes to the decks on the second stage to deliver a set of Faithless remixes and party bangers, ‘Insomnia’ bringing about a typical site wide reaction of hands in the air unity. 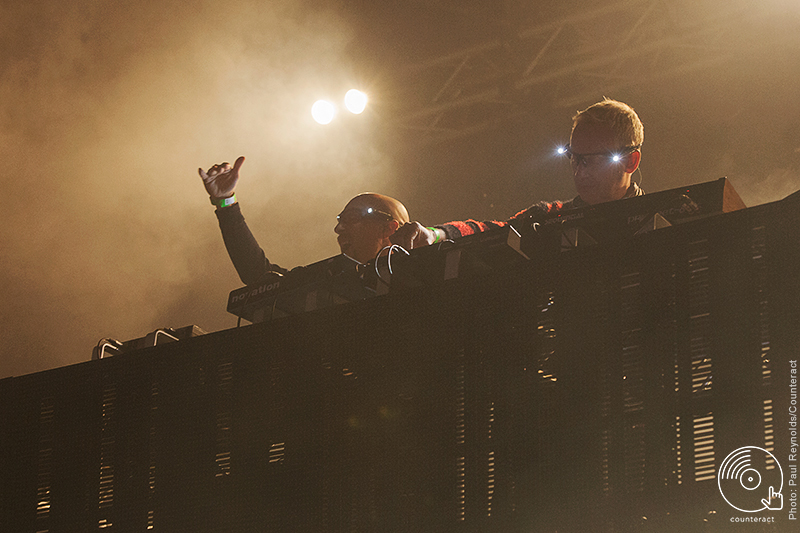 It’s then left to Orbital to see off the first day of the festival. In a final moment of assimilation , two sets of head torches appear on top of a platform on stage, resembling the blinking industrial crane that towers off to the left of the site. They deliver a classic set laden with ambient electronics and bass rushes that injects euphoria into the crowd as the sky makes good on its impending threat and lets loose the rain. From opener ‘Lush 3’ and ‘Impact (The Earth Is Burning)’, to a sublime ‘Girl With The Sun In Her Hair’ via new track ‘Copenhagen’, the crowd find themselves saturated in electronic bliss as lights flash and the Hartnoll brothers beam out their interplanetary message. Some tracks segue effortless into one another, like a classical suite, others take a pause before continuing afresh. ‘Satan’, which could be described as their electro heavy metal masterpiece breathes in fire before incinerating everyone. As is characteristic of an Orbital set, Belinda Carlisle’s ‘Heaven Is A Place On Earth’ makes an appearance on a blissful ‘Halcyon and On and On’ and is then cleverly broken down into ‘Inception’ like fragments. 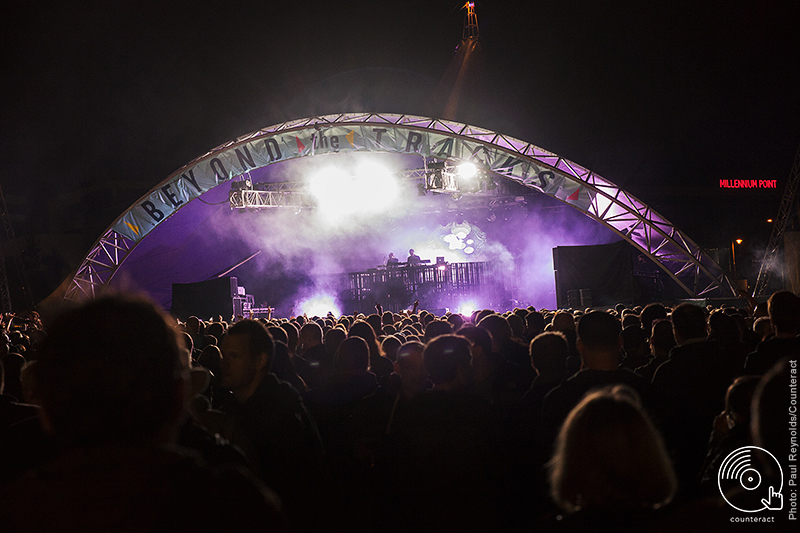 ‘Belfast’ brings the main set to an exquisite ending before ‘The Box’, ‘Chime’ and ‘Where Is It Going?’ seal the deal in true Orbital fashion. The rain has stopped, but no one really cares as everyone makes the wonderfully short journey to leave and heads out into the beating heart of the city.